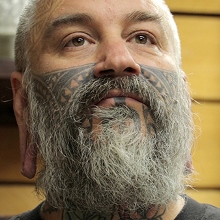 Four students enrolled in the University of Denver's Media, Film, and Journalism Studies (MFJS) graduate programs had their documentary film, Face Value, screened at the prestigious DocuWest Film Festival this fall. They received this honor when their film was selected as "Best in Show" at the MFJS InShort Documentary Showcase, an annual event that screens student productions created during the preceding two-quarter capstone film sequence.

Face Value is a 15-minute documentary peering into the life of tattoo artist Ian McKown. The short film sheds light on the stigmatization of tattoo artists in the Denver community, highlighting McKown's unique perspective on the world. The cinematographers labored to create a unique experience for the viewer, framing interviewees in close-up at emotional times and underscoring dramatic moments with music and sounds in ways that offer a rare glimpse into the personalities of the documentary's subjects.

From the editing, to the music, to the choices made by the crew, the documentary brings into view a unique community of tattoo artists and customers, as it includes personal and often unexpected commentary from those who are often better known by their expressive body art than by their words. Face Value's writers and producers are now seeking out additional venues for the screening of their film.

Stefan Wisnoski, one of the members of the crew, first came up with the idea of interviewing McKown, who sports a heavily tattooed face, nose rings, and substantial facial hair.

"The idea for the documentary stems from my initial interactions with our main subject, Ian," Wisnoski said. "He is a tattoo artist at the shop where I've been getting most of my work done for the last couple years. And despite the fact that I'm heavily tattooed and have experienced discrimination because of it, I still caught myself avoiding Ian simply based on his appearance."

"In reality, Ian is one of the most caring and genuine people I've ever met—the 100% polar opposite of the pre-conceived notion I had for someone with his appearance," Wisnoski added.

Wisnoski made the documentary with team members Maureen Lee Maloney, Oanh Le, and Marteene Diaz. Each of them had a hand in every part of making the film come to life, working together from scripting to cinematography to the editing of the final film. From the moment the four filmmakers met as students in the MFJS graduate program, they've worked on every film project together, both academically and professionally.

"My teammates are very supportive of each other. We are able to have a discussion about what works and what doesn't. There is no ego on this team. We offer each other constructive feedback and we figure out the best solution together," Le said.

The group has also started their own video production business since the documentary wrapped. SUM Media House has been taking on clients for commercial projects, and they hope to build the company to the point where they can produce original narrative content. Maloney sees nothing but a good time ahead when she considers the prospects of making films with her friends in the future.

"Making a film is like building a puzzle and having no idea what it's supposed to look like. Every time a puzzle piece clicks into place, I get all tingly and excited." Maloney stated.