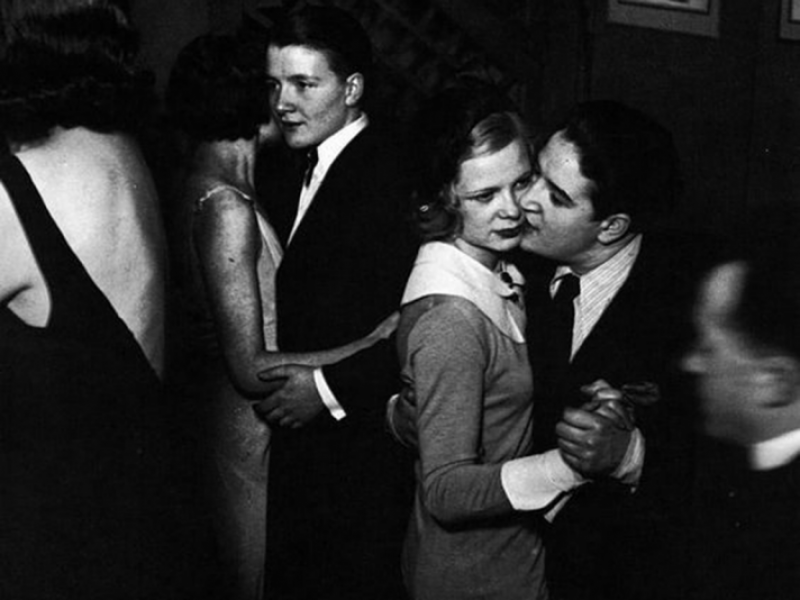 Guest director Clare Hammoor conceived of the production—called “The Secret Paris Project”—several years ago, after coming across a book of photos by the French-Hungarian photographer known as Brassai. Shot in brothels, opium dens and hidden cafes in the 1930s, they show a Paris where queer culture is celebrated and the transgressive becomes, for a moment, accepted.

“[Brassai is] working in queer clubs, backstage at any number of vaudeville-esque sort of performances. He’s capturing people out on the street at night—a lot of café photos—and he takes some photos that are huge for the time,” Hammoor says. “One whole section is on this interracial dance club, which was quite taboo at the time, and he’s taken these other ones that were really focusing on this queer bar called the Monocle. He’s not part of the community, and you get a feel for that through the lens, but you also get a real feel for how beautiful these people are and how ‘owning it’ they are.”

Using the photos as inspiration, Hammoor tasked his cast of nine DU students to create scenes and characters that reflect their views and struggles as young people in a society where queer voices still struggle to be heard, despite their growing presence in popular culture. The show is performed clown-style, with no spoken dialogue and a musical backdrop of ’60s French pop.

Cast member Sami Helgeson, whose “country mouse” character represents “a timid outsider who doesn’t really know what’s going on and steps into this crazy world,” says the idea of a cast-created show was what drew her to audition for “The Secret Paris Project.”

“It’s been a lot of exploration and discussions within the group of, ‘This really spoke to me’ and then moving on from there,” she says of the process. “There’s a really good balance of being in drag and having tons of fun and also remembering the struggles that people have to go through in that space as well. We have one scene in the show where there’s a character discovering who they are in a very vulnerable way, and mirrored against that discovery and the celebration of that is an acknowledgement of pain and suicide rates. We’re displaying the contrast between the really beautiful aspects of being able to express who you genuinely are and the pain and struggle that comes along with that in society.”

The nine clowns of “Secret Paris” appear and reappear throughout the night, in various combinations and in a mix of shorter and longer scenes. “There isn’t [the] clear narrative journey that you might expect,” Hammoor says. “I phrase it to the cast that it’s a little more like a poem that you get to experience, rather than a story.”

What gives the piece its depth, he says, is the cast members’ willingness to be vulnerable and to create scenes that mirror their personal lives.

“How that reads in some of the work they’ve created is surprising and really beautiful,” Hammoor says. “The cast is a good mix of people, and everyone’s been really excited to explore. That’s what I’ve really been pushing. At the end of the day, we’re doing a show at an education institution, and this is about deepening their own love of the art form and their own practice as an artist, so I want the experience to be about that.”