Face-to-Face with the Dead Sea Scrolls 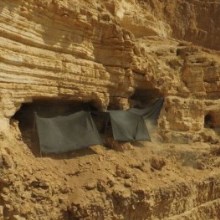 Since the Dead Sea Scrolls where discovered over 70 years ago, many people have seen these ancient manuscripts in photos or film. They have been the subject of books and movies, featured in TV series, and even, published online through the Dead Sea Scrolls Digital Project.

Now, the Dead Sea Scrolls are coming to Denver and will be on exhibit at the Denver Museum of Nature and Science beginning March 16, 2018.

It is one thing to see the Scrolls in digital format, and quite another to see them in person. Our faculty, whose work touches upon all aspects of the Scrolls, share their insights on the significance of the exhibit.

Alison Schofield has been working directly with the Dead Sea Scrolls for the last 18 years, but her interest in the Scrolls started in her youth. Today, the associate professor of religious and Judaic studies is part of a three-person editorial team to produce a new editions and translations of the manuscripts.

"Every day I wake up thinking, 'I'm really just amazed that I have this opportunity to work with these Scrolls that were written by so many hands 2,000 years ago.' The Scrolls tell us so much about not only the origins of Judaism, but then the branching off of Christianity. To have that opportunity to hear those ancient voices and to be able to share those ancient voices with people is a great opportunity," Schofield said in a recent interview about her work.

Sarah Pessin, director of the Center for Judaic Studies, is working with Schofield to coordinate "Inscribing the Sacred: Reading, Writing and the Origins of the Bible as Book," a symposium planned for May that will bring together visiting scholars with the DU and Denver communities in discussion about the Scrolls, their history and meaning.

"It is amazing to have such an influential piece of history brought to Colorado," said Pessin. "The Center for Judaic Studies is excited to help organize an event around the exhibit which will give students and community members even deeper ways to delve into the implications of these materials."

Past and Present Come Together

Larry Conyers, professor of anthropology and world-renowned expert in ground-penetrating radar (GPR), is used to seeing images of archaeological sites in the form of radio waves, but he also understands the significance of being able to see artifacts with one's own eyes.

"It will be exciting for some in the anthropology field to be able to see these extraordinary artifacts in person for the first time. Their meaning and what they can tell us about history, religion, culture and societal changes over time becomes even more impactful when one can come into direct visual contact with these ancient and extraordinarily rare manuscripts," he said.

"Seeing the Scrolls up close, next to their translations and gaining a better understanding of what these important documents can tell us is exactly what drives me to see the exhibit," added Conyers.

Beauty of the Script

Howard hopes that, through the exhibit and by seeing the fragments and the calligraphy firsthand, visitors will have their own personal connection to that time in history.

"Art helps people visualize people, places, and things that can't always be explained," she said. "The Scrolls were once hidden in this unbelievable cave, surrounded by this unbelievable landscape, at a time when people were being hunted down and forced to hide in caves for fear of their lives. When people see the Scrolls in person — the beauty of the Hebrew script, historical context, and translation — I hope that history will come to life for the viewer."