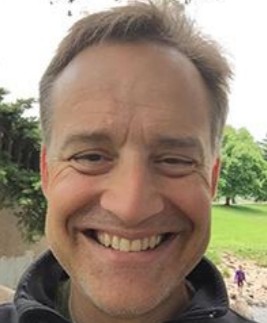 "My own autobiography is the primary influence in terms of my field of study in language, cultural and global media studies," said Christoph Demont-Heinrich, known to his students as Dr. D-H. The son of a German father and an American mother, Demont-Heinrich developed an interest in the intersections between language, culture, power and media from a very young age. After graduating from Allegheny College in 1988, Demont-Heinrich worked as a journalist in Boston for eight years, where he covered business, general news and sports.

Demont-Heinrich fell in love with the west after a cross-country bike ride in 1994, covering 11 states and 4,200 miles. He credits this trip with inspiring his move to Colorado, where he earned his master's degree from Colorado State University and PhD from the University of Colorado Boulder.

A lecturer in Media, Film & Journalism Studies since 2005, Demont-Heinrich is today an associate professor at the University, teaching journalism, media studies and international communication classes. Demont-Heinrich's research draws on his experience as a child of an immigrant, focusing on American cultural insularity and the ways in which Americans view the global hegemony of the English language.

Demont-Heinrich is currently developing what he calls the American Cultural Insularity Theory in the Center. The theory details the ways in which Americans, particularly those in the majority, look inward as opposed to outward in terms of their cultural orientations. This means that, even with the possibilities for vast cultural consumption provided by the internet, Americans tend to consume dominant American film, music, TV, and news, as opposed to that produced by other national actors. Demont-Heinrich uses this theory in courses such as International and Development Communication, where he encourages students to explore cultural power structures and challenge hegemonic narratives in the way they consume media.

When asked what he enjoys about teaching in MFJS, Demont-Heinrich said, "Perhaps what I enjoy most is engaging with young adults and working to inspire them to think more critically about the world and their place, and role, in that world. I especially enjoy it when students in my classes 'come back' at me and challenge me, challenge the authors we are reading in class, and each other, to ask new, fresh, important questions, especially questions regarding power, hierarchy, and social and cultural inequality." Demont-Heinrich continues to inspire students to pursue life-long learning and to develop their own relationship with global media studies.