Finding "the Greater" in Religion and Science 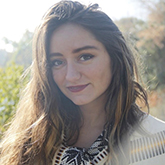 On a spiritual level, Danielle Gualtieri has always had faith in what she calls "the Greater"—a word that she says can be replaced with whatever makes individuals feel most connected, such as God, Love, the Matrix, etc. She decided to explore that faith holistically by pursuing majors in religious studies and molecular biology, and minors in anthropology and chemistry. Gualtieri sees a link between religion and science, but admits that the more she learns, the more mysterious the Greater becomes.

"I have faith in science and in infinite love," said the fourth-year student. "I also have faith in the fact that there is a lot of stuff going on under science that we have yet to understand. I believe dismissing either side, science or spirit, is missing the big picture. Science is real, but so are miracles!"

Through religious studies and anthropology, Gualtieri explores the connection between religion and culture. She cites Prof. Sandra Dixon's Culture, Psyche, and Religion class as helping her understand that people are a product of their culture, and that the culture is a product of the people. She hopes to better understand the differences in religions by viewing them through the lens of the cultures in which they're practiced.

"By studying anthropology, I am able to understand religion better by placing it within context," she said. "I think every religion is a culture's own way of interacting with this Greater thing. I think this Greater is interpreted by people using their culturally created lenses, but culture is also created by people. It's hard to find a starting point, to know what was influenced by what, which piece came first. It is more likely religion, culture, and the participating people all develop together."

Through molecular biology, Gualtieri sees the Greater in transposons.

"These are tiny fragments of DNA who only carry enough code to duplicate themselves or change their location within DNA. They don't have any other functional purpose we know of. These tiny molecules amp me up, make me curious and excited. This will to replicate, to live, and to multiply is the most basic form of life I have encountered," she said.

Gualtieri's faith is central in her life, and she finds peace in the pursuit of science as well as meditation and prayer.

"I don't think anyone can have all the answers, and I don't think having answers is the point," she said. "If there is a point, it's to enjoy our human experience, to love each other, and play in the beautiful playground of creation. Science and prayer are me playing with and connecting to creation."

Gualtieri is considering naturopathy as a possible career, and is using her molecular biology degree to work as a medicinal botanist for an herbalist company that believes in the medicinal properties of herbs and the synergy between them.

"The environment of my company is full of spirit and belief, so I am able to employ my religious studies degree daily, as well," she said. "It is a perfect fit and I plan on staying and becoming a full-time employee after I graduate. Later I might go to naturopathic school to become an ND. We'll see where the journey takes me!"

Having faith in the journey is what inspired Gualtieri to pursue disparate majors and minors at DU. Now that she is a few months away from graduation, what advice would she give to incoming students with similar ambitions?

"Trust your journey. Find what you love, what is interesting, and follow that. There are so many paths that we haven't even thought of, so having faith that you will end up where you are supposed to be is imperative and liberating," she said.