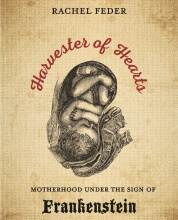 Sometimes inspiration is a spark from deep within. For Rachel Feder, the inspiration for her new book, Harvester of Hearts, was more of a kick in the belly.

Feder, assistant professor of English, was teaching a course on Romantic literature in 2015 and had assigned the reading of Frankenstein by Mary Shelley. There is a long history of connecting the novel to Shelley's experiences as a mother, according to Feder. But Feder had not been interested in teaching from that perspective until she became a mother herself.

"Teaching the novel very late in my pregnancy, rereading it and then sitting in front of the class while my son kicked and punched inside me, something undeniable crystalized," she said. "I had a new experience of an old interpretation of Frankenstein, and that seemed like a fruitful spot from which to begin writing."

Harvester of Hearts is a hybrid text in which Feder explores how Mary Shelley's exchanges with her children — in utero, in birth, in life, and in death — infuse her literary creations, Frankenstein and the lesser-known Mathilda, according to publisher Northwestern University Press.

"Mathilda is a strange, dark novella that Mary Shelley wrote after Frankenstein, at a very tragic moment in her life," Feder said of the author who gave birth to four — and lost three — children. "I often teach it as a sort of companion narrative to or refraction of Frankenstein, so it was natural for me to bring it in here."

With her son dozing on a cushion beside her during parental leave, she wrote the first essay in the book, entitled "Forgetting," which opens with moments from teaching Frankenstein at the end of her pregnancy.

"Harvester of Hearts grew out of a particular class experience and was written in conversation with my students. In fact, I cite several students, both graduate and undergraduate, in the book!"

Feder teaches Shelley's fiction — and Wollstonecraft's fiction, which she also discusses in the book — as part of several different courses at DU. She's frequently in conversation with students about the texts.

"One of my favorite things about teaching is developing and sustaining an intellectual community in which each participant can share unique perspectives, insights, and investments. I learn something new about a text every time I teach it," she said.

Feder, who came to DU in 2014, has a PhD from the University of Michigan. She teaches eighteenth- and nineteenth-century British literature with a focus on Romanticism.

"Harvester of Hearts was a bit of a departure for me, as my research and writing have tended to focus on poetry," Feder said. "I'm currently at work on a long-term book project, Counting Nowhere, which thinks about Romantic poetry, debates about the nature and reality of infinity, and the contemporary environmental humanities."