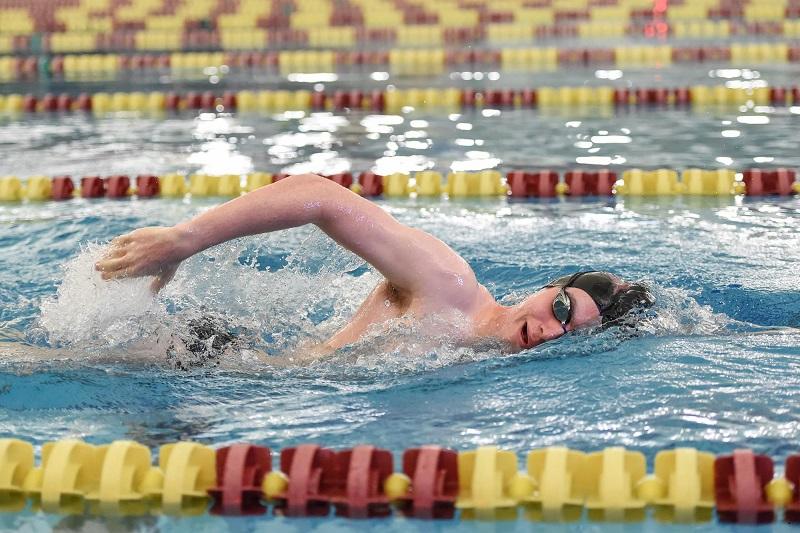 Even with three majors, Robin Kuebler doesn’t think his time at the University of Denver will be defined by what he learned in the classroom.

Nor, he says, will it be exemplified by his experience as an elite athlete on the DU swim team.

When Kuebler looks back on his years on campus, after triple majoring in international business, finance and French, he thinks of how he’s grown personally.

“It’s a transitioning,” Kuebler says of college, “a structured way to practice being a real person. It’s a proxy to teach you real things like how to live and how to be an adult. I’m certainly a different person than I was when I was a freshman.” 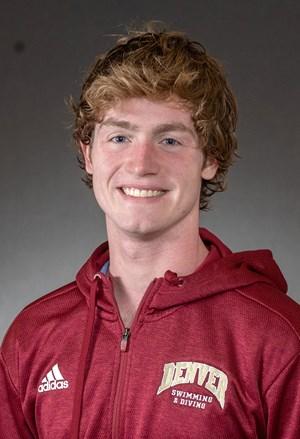 The Kuebler who committed to swim for the Pioneer program admits he was an athlete first during his initial year on campus. As a kid from the Denver suburbs, Kuebler grew up competing in swim meets at DU’s facilities. He couldn’t wait to dive into the University’s 50-meter pool as a Division I athlete.

But gradually, over the course of his athletics career, he could feel the balance shifting. Kuebler stayed committed, kept training, kept turning in strong results, but he couldn’t deny that swimming came harder to him than academics did. And his interest in the international business world was growing with every course.

His honors thesis focuses on blockchain, a way of recording digital transactions, often for cryptocurrencies like bitcoin. Kuebler’s work studies ways to apply blockchain in supply chain management, enhancing and easing communication among divisions and departments.

In a typical supply chain, he explains, a business might only have connections to the links above and below it. In his thesis, Kuebler explores a system that allows a business to upload all its relevant information and rely on blockchain to distribute what each party needs to know on a case-by-case basis.

Upon graduation, Kuebler plans to dive even deeper into blockchain, traveling to France in pursuit of a PhD. The future looks radically different than it did even a couple months ago, when the senior still had his focus on the pool. Standing on the platform before his final race of the Summit League Championships, his sights were set on German nationals, where Kuebler, who holds German, French and American citizenship, would to try to make the Olympic team. 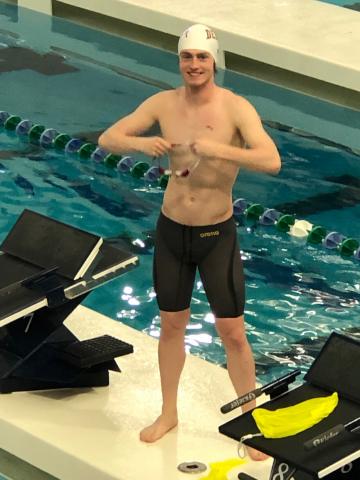 As soon as the race finished, he knew his competitive career was over, too.

“I was ready to be done,” Kuebler realized, “because I’d learned enough from swimming. I’m good at other things, and I was born good at them. And I don’t have to deny myself the happiness I get from being good at these things naturally to try to prove I’m good at something that I wasn’t born good at.”

He hasn’t been back in the water since that meet in February. Kuebler says he doesn’t plan to ever swim competitively again. And he’s OK with that, even after dedicating much of his life to the sport.

“Now, I define myself based on my values,” he says. “I am a person [who] wants to do as much good as possible in the world.”

As he prepares to graduate, Kuebler says he’s proud of the relationships he formed at DU and how he overcame challenges, both physical and mental. Although he’s not where he thought he’d be four years ago, Kuebler says he’s ready for anything.

“[Graduating] doesn’t feel like an end at all,” he says. “It will feel like a beginning. I wasn’t ready for the real world, but I am now. College was a place of growth, and I grew enough to start. And now I can’t wait to start.”