Jeanette Vizguerra: Learn Her Name and Story of Resistance

If you think you know Jeanette Vizguerra's story, think again. You know what the media wants you to know: the basic facts, not the whole truth. Yes, she is a mother and she is an undocumented immigrant. She is also a community organizer and activist. But she is much more than those words, and her astonishing work over the last couple of decades speaks for itself. 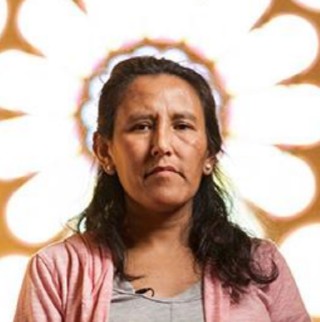 On April 22, 2019, students from a multicultural journalism class at the University of Denver were welcomed into the First Unitarian Society of Denver, where Vizguerra currently resides and has taken sanctuary, to hear her truth. Since 1997, Vizguerra has been struggling to stay in the U.S. as an undocumented immigrant. Describing herself as a "bird in a cage," Vizguerra opened up about the harsh realities she faced after her arrival in the U.S. while working as a janitor and then a union organizer for the SEIU (Service Employees International Union) and simultaneously fulfilling her parental duties.

Vizguerra's organizing work extends outside of the church, but she must remain inside at all times to stay safe. Her children are not in her direct care so they can attend school and lead more 'normal lives,' but her limited time with them (on weekends only) bothers Vizguerra greatly. Though she is able to keep in touch with them through phone calls, she wishes more than anything to spend more time with her four children and three grandchildren.

In 1997, Vizguerra moved to the U.S. for security reasons because her husband, working as a bus driver, had been kidnapped three times. Finding work in Mexico was incredibly difficult due to economic hardship, so she, her husband and infant children decided to migrate north. In the States, she got her first job as a janitor in Denver. During this time, Vizguerra witnessed and suffered abuse and other great injustices in the workplace; she began organizing on her own, but then was hired by the SEIU as a union organizer. She later owned a cleaning and moving business with her husband and held other jobs, all while continuing her organizing work.

In 2009, Vizguerra was stopped for a minor traffic violation of driving without a license, but was arrested for the first time when police discovered she didn't have legal documents. This quickly put her in the hands of the immigration system, and she was transferred to ICE (Immigration & Customs Enforcement) and the GEO immigration detention center in Aurora, CO. She decided to learn her legal rights, both for herself and for others in her situation.

It started with just a few co-workers asking for help, then strangers; now Vizguerra is a nationally recognized advocate for immigration rights and sanctuary, helping anyone she possibly can while fighting her own legal case against deportation. She is a founder of three immigrant rights organizations, including the Metro Denver Sanctuary Coalition (MDSC), Abolish ICE, and MUJERR (Mujeres Juntas Ejercen Resistencia y Recursos -- Women Together Exercise Resistance and Resources).

Vizguerra has worked with the MDSC to organize a coalition of 31 sanctuary churches. Four are "host" churches where undocumented immigrants may stay while they fight their legal cases, and the remaining church congregations provide support. Churches are 'sensitive places' that ICE does not enter without a warrant.

Vizguerra is familiar with the immigration detainment and deportation process and has experienced the cruel and inhumane conditions of detention centers on multiple occasions. Not once, however, did being detained stop her from working to organize her community.

In 2017, Vizguerra was named one of Time Magazine's "100 Most Influential People," about which she said: "I feel like this is an honor and something I'm very proud of for my community. To get this much recognition during the Trump era is important to me." Vizguerra noted that the current system is "lying to us and using us" on a daily basis to get away with unacceptable acts of hate. She speaks openly about her disapproval of President Trump and encourages people to use their rights to educate themselves.

The same year Vizguerra was nominated by Time, U.S. Sen. Michael Bennet of Colorado introduced a private bill which allowed Vizguerra to leave sanctuary, but her stay of deportation reached an end in March 2019. ICE refused to extend her stay, so she now depends on fundraiser money and community efforts to hire new lawyers, hoping to win her case, avoid deportation and get legal status in the near future. In March 2019, US Rep. Joe Neguse of Boulder introduced another private bill on her behalf. There are ways the community can help, which are listed below.

Sammy Walker is a junior and double major in journalism studies & sociology who took MFJS 3655/4655: Multicultural Journalism from Professor Margie Thompson during spring quarter 2019. She wrote this story from a group interview with Jeanette Vizguerra, an undocumented immigrant leader who is currently in sanctuary in Denver. The class took a field trip to the church where Vizguerra is living in sanctuary. Photos are courtesy of CNN.