Journey of a Journalist 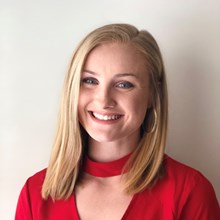 "It was overwhelming, yet an incredible feeling to see my work be recognized by such a prestigious institution," she said.

Damon Runyon (1880-1946) was a short story writer and journalist whose work includes multiple books, published stories, stories adapted for film, plays, and a radio and TV show. The scholarship named in his honor accepts nominations from seven Colorado universities, including the University of Denver. Nominees from each school submit application materials showcasing their work.

"I sent in a total of five journalistic pieces, including video, blog, and hard news styles. The Press Club then decides who is the winner from each school. I was honored to receive the scholarship for DU," said Swander.

Swander accepted her award, along with the other award recipients, at The Denver Press Club dinner on April 27, where she met nationally-renowned journalists.

"I had the opportunity to meet Marty Baron, executive editor of The Washington Post, who was being awarded the Damon Runyon award from the Denver Press Club. Meeting and talking with such a successful journalist and editor who has worked for the Miami Herald, The Boston Globe and now The Washington Post, was so inspiring," said Swander.

Swander also met with other aspiring journalists from the other schools and created lasting relationships.

"We send one another pieces and receive criticism back, which has helped me learn so much in my writing," added Swander.

Swander attributes her win to what she has learned with her journalism major.

"I feel so lucky to be a part of the journalism program here at DU. Not only are my professors very invested in my work and in helping me succeed, but they are attentive to who I am as a growing young adult, which is very important to me, and I think a reason I've done well throughout the program," said Swander.

The best part of the program for Swander was the ability to experience more than just journalism. She was able to learn about media in strategic communications classes, create movies for film classes, and build upon her overall creativity.

"It would be a dream to become a producer for online magazines such as Vice or Buzz Feed," said Swander. "I think those platforms would allow me to follow my dreams of reporting stories that otherwise might not be told."

But, she is also considering continuing her education before heading into the workforce, "I could travel abroad to Sweden where I would attend LUND University to earn my master's degree in Intercultural Communications through their Gender program."