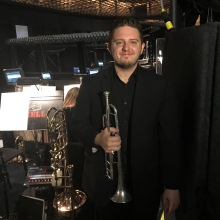 Before it takes the show to Broadway this spring, Disney debuted "Frozen: The Musical" at Denver's Buell Theatre in summer 2017. In the orchestra pit for the much-anticipated premiere were three faculty members from DU's Lamont School of Music, as well as Lamont graduate student Jake Boldman (MM, Jazz Trumpet Performance) who played trumpet for the show. He took us behind the scenes to share in the excitement.

Q: What was your favorite part about being involved with "Frozen"?

A: Opening a new show, that was the coolest part to me. None of this music had ever been played, and they were making changes constantly. We got notes every single day, like, "This one note in this measure is cut out," or, "Piano, bass, this measure is cut out; everybody else keep it in." It was everything from tweaking little things all the way up to they cut whole numbers. We had three or four tunes get cut.

Q: What did you think of the music overall?

A: I loved it. It read down incredibly well; the parts were pristine. I didn't have one bad page turn, all of my notes made sense, the pacing was incredible. The book is a blast. You got some showy tunes, then some more classical playing. That's what I like about doing musicals—there's so many different types of playing all in one show.

Q: Did you ever actually see the show?

A: Technically we never got to see the show. We have no idea what's going on on stage. For about a week they had a monitor up—they had an upright piano in front of the brass section, and there was a wall with windows so we could see the conductor but we could also see this monitor up on top of the piano. We saw it on there maybe five or six times, then they got a new piano that was too low.

Q: Were you a "Frozen" fan before this?

A: I have never seen [the movie]. I still haven't seen it. Now I don't want to. But after all this I guess need to.