Learning the True Meaning of "Alliance" 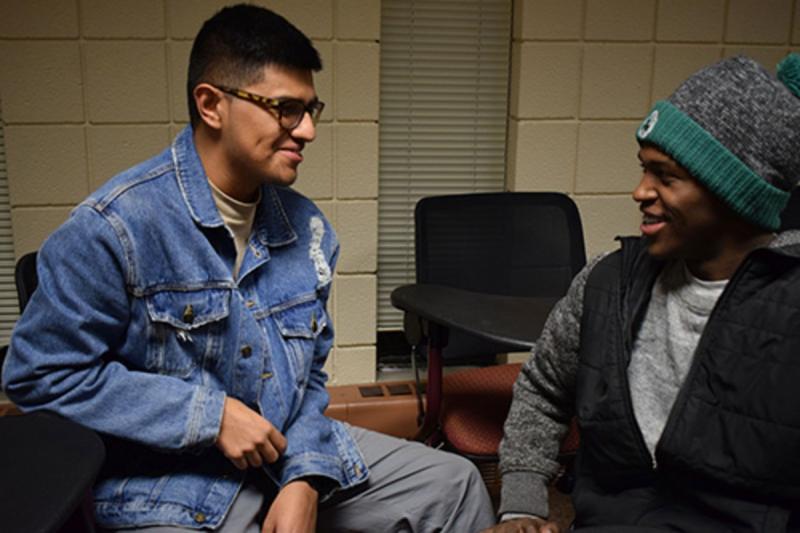 In two years at DU, I've had no more than three black classmates.

Since only 20 percent of our campus population is comprised of people of color, my experience is likely similar to most white students. We occupy a neutral, distant space when it comes to race: we've heard about the racial tension on our campus, we care about it, but we've never really come into contact with it.

Sure, I've heard stories around campus that have horrified me. From a student having eggs thrown at him, to others having their cars vandalized to another finding himself pictured multiple times in a campus promotional brochure, hearsay about the racial climate does float among students and awaken our consciences.

In particular among these: my intimidation at the words "ally" and "alliance."

Until last week, when I would hear about concepts like being an ally, I would sometimes get overwhelmed. Without anybody to explain it to me in person, I got the impression from social media that the best way for me to prove I wasn't racist was to engage in constantly posting on social media and to attend meetings of every affinity group on campus—some nondescript slew of requirements I just didn't have time for.

I'd think "oh, that's those activists' thing, not mine. I've got my own clubs." But this mindset changed as soon as I stepped into my first alliance meeting.

On the night I decided to go to Black Student Alliance (BSA) to find sources for this Clarion issue, the content of the meeting surprised me.

BSA wasn't talking strategy that night, or having a heated discussion about privilege or doing anything that could be considered "activism." Instead, they were playing a raucous homemade game of Black Family Feud.

But the laughter that filled the room was quick to dispel these. The host of the event that night came and introduced me, and I joined a team and had a blast. No one asked any questions.

As I allowed myself to have fun, a realization came over me. The word "alliance" didn't imply any kind of mission that I wasn't welcome to participate in.

My realization was confirmed talking to the BSA members I interviewed, who all used the same phrase to describe their membership in BSA: "It's the only time we can all be together."

The primary importance of BSA lies not in the opportunity it provides to advance some kind of mission, but just to provide a space for black students to come together, a necessity that had barely even occurred to me.

As BSA member Rebeka Betemedhin, a third-year political science and theatre major from Las Vegas, Nevada told me: "Remember that discomfort you felt being the only one of your race in there? Imagine feeling that going into every class."

Betemedhin explained the necessity even further: I had a choice to go to the meeting and could have left if I wanted to. Black students don't have a choice to leave their classes.

In a sense, they don't even have a choice to be in an alliance or not. Toni Dunlap is a third-year computer engineering major from Atlanta, Georgia in BSA. As an RA with 18 credit quarters and multiple club involvements, she explained that she was told, wisely, by her advisor to drop a commitment. But even if she wanted to, she wasn't going to drop her only opportunity to be with other black students.

This struck down the flawed analogy I had formed in my mind between my club involvements and racial affinity groups. For those of us who don't come from underrepresented groups, our membership in sports teams, religious groups or other clubs is far more optional.

Finally, I can't imply that alliances are all fun and games. While Black Family Feud taught me that "alliance" isn't a scary word, it's still a powerful one.

As Dunlap explained to me, the on-campus affinity groups were a major force behind the student demands document to DU administration that made news last year, and convinced DU administration to ask the person who graffitied the wall to make a public apology (though, reportedly, this never occurred).

BSA also provided crucial assistance for third-year Ahmed Dado, a third-year international studies and psychology major from Nairobi, Kenya. According to Betemedhin, he was egged by anonymous attackers twice within a year, and was enabled by BSA to deliver an emotional in-person plea to Chancellor Chopp, with the alliance literally standing behind him.

If you're a white student on campus who's passively interested in your campus's racial climate, I'd highly recommend going to an alliance meeting at some point during your time at DU. And if you're strongly opinionated about it in any way, or feel that there's pressure on you as a white student, I'd say going to one would be a necessity.

Your experience won't be identical to mine, and you may not bring any harmful biases or need to be "corrected." But while you don't need to go to prove to anyone that you're not a racist, you'll undoubtedly learn something valuable through interaction with your classmates of color.