Linking Students and Alums in Filmmaking 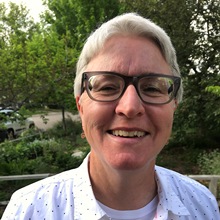 After 30-plus years in filmmaking, Sheila Schroeder knows how hard it can be for students to get a foot in the door without experience or connections. To bridge that gap, Schroeder created Project DU F.I.L.M. (Film Initiative Linking Mentors) to bring together DU students, alumni and faculty in the making of short films.

Project DU F.I.L.M.'s first project was conceived on Valentine's Day 2015 in a small café in Nederland, CO. Schroeder, associate professor of film studies, and her partner were grieving the loss of Schroeder's father in December 2014. To change their mood, they decided to anonymously buy breakfast for an older couple in the restaurant.

"This lifted the spirits of the waitresses at the Sundance Café and our own," said Schroeder. "We took a walk afterward and started brainstorming what might have happened once we left. By the end of our walk we had the makings of a short screenplay and spent the rest of the day typing up what became the first draft of Happy F-ing Valentine's Day," a short narrative about unlikely cupids.

Schroeder began to think about how to get the film made when she came up with Project DU F.I.L.M.

"I thought about dual goals of involving my Denver alumni and providing advanced experiential learning opportunities for my students. I was also motivated, as graduate director, to create a meaningful program of study for four graduate students I had recruited to our program," she said.

Since then, Happy F-ing Valentine's Day has played in over 20 film festivals and has received multiple awards including best short screenplay, best short narrative, and best short comedy.

Project DU F.I.L.M. recently completed a second collaborative film, Scary Lucy, about a risk averse comedienne battling breast cancer who makes it her mission to destroy a hideous statue dedicated to her comedic idol, Lucille Ball. The screenplay for Scary Lucy has already received a Grand Prize from the American Movie Awards, and will be screened at film festivals this summer and fall. Scary Lucy was recently screened at the ICM Partners building in Century City, CA to approximately 40 DU alumni.

"Screening in LA where some members of the audience are seasoned film and television professionals was nerve-wracking," said Schroeder. "Alumni in the audience have worked on and written for top shows like Orange is the New Black, Narcos, Nashville, Mars, The Marvel movie series and more, so they are quite used to top quality media productions. Fortunately, the reviews were wonderful and the audience talk back was quite engaging."

Schroeder wears many hats through Project DU F.I.L.M. In addition to having written the screenplays, she oversees all aspects of the filmmaking process as a producer—fundraising, location scouting, casting, crew selection, scheduling, and Costco runs.

"I'm fortunate to partner with such amazing alumni and students who teach me so much in the process," said Schroeder, who also helped edit Scary Lucy. "By editing the film, I was not only able to refine my own narrative editing chops, but I was able to think more about storytelling. This will be particularly valuable as I head back into the classroom to teach my courses in script writing and editing."

Schroeder's entrée into filmmaking came by happenstance. As a journalism major at Valparaiso University, she was planning a newspaper career, and had an internship in corporate communications, when she was asked to write a business plan for a writing course. She wrote about how the company where she interned should revive their video production department and hire her to run it.

"I got an A on the plan and started work a week after graduating...running the video department!" she said.

Her love for filmmaking blossomed from there. After working in corporate media for five years, she attended graduate school at Indiana University where she worked on two documentaries for the PBS station in Bloomington.

"I was standing in a cornfield in late June about 4:30 one morning, shooting the mist rising from the stalks for a documentary about nuns in Oldenberg, IN who ran an organic farm and participated in pagan celebrations like the summer solstice," said Schroeder. "In that moment I thought to myself, 'this is my calling.' That was a defining moment in my life and in my career."

Schroeder has just finished her 20th year of teaching film studies at DU. She most enjoys seeing students discover their voice.

"In our department, we encourage students to work on projects that are meaningful to them and to develop a perspective, to come to the table with something to say. It's most gratifying when I see them use the medium of filmmaking, regardless of the genre, to express something important to them," she said.

What's important to Schroeder is that students have the opportunity to work alongside alumni mentors and learn what it means to be a professional filmmaker. Recognizing industry-wide inequities, special emphasis is placed on populating the cast and crew with people from traditionally underrepresented groups.

"Ultimately, Project DU F.I.L.M. is about creating a collaborative film community that will help change the face of filmmaking in front of and behind the camera. This mission drives us forward," she said.