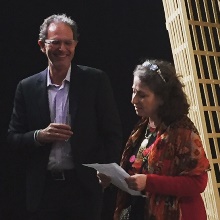 The School of Art & Art History is deeply saddened to announce the unexpected loss of our treasured colleague, emeritus professor Lawrence Argent this Wednesday, October 4, 2017. With a career of over 20 years at the University of Denver's School of Art & Art History, he brought great skill and passion to his teaching, while his international reputation as a sculptor grew at an ever-increasing pace. He was a leader in his field, and he will be missed. You can learn more about Lawrence's career and artworks on his website, where you will recognize his famous I See What You Mean, fondly nicknamed "The Blue Bear." Read a reflection from Professor Deborah Howard and statements from his colleagues and friends below.

I have taught painting in the School of Art & Art History (SAAH) at the University of Denver (DU) since 1987 and knew Lawrence for 24 years. The following are a few memories and reflections of Lawrence as a teacher, colleague and artist. In writing this, I hope it will give you a window into parts of Lawrence's life and the contributions he made at DU and in Denver.

Beginning at DU
Lawrence was hired to teach sculpture at the University of Denver in 1993. I was on the Art Department search committee to find a new sculptor along with Art Professors Bethany Kreigsman and Maynard Tischler.

At the time I was collecting the application envelopes and Lawrence's was the first one to arrive in my mailbox. From the moment I looked at his slides I knew Lawrence was "the artist" we needed at the School of Art & Art History. It was clear Lawrence was fearless and visionary. Lawrence's application showed he could do anything, and after he arrived at DU he did do everything as a teacher, sculptor and artist.

Staircase Sculpture
In Lawrence's application, there was one sculpture I feel is emblematic of who Lawrence was as a person, artist and teacher. It was a tall and narrow wooden staircase that had no railings and seemed to magically balance on the first step. Lawrence placed the elegant staircase outside, where it was taller than the surrounding trees. Most people would not climb that railing-less staircase. A few people might hesitantly climb, but they would stop at the top and turn around and go back down. Lawrence was never afraid to climb that staircase and he was not afraid to jump off the top step, and when he did jump, he would fly. Of course, Lawrence was a risk-taker unafraid of falling. If he jumped and hit the ground, he would pick himself up and climb the stairs again.

Artistic Evolution
After arriving at DU, Lawrence's journey as an artist evolved at lightning speed, from his early work that included tiny golden houses on a weathered green army cot and brass-plated canoe oars, to his recent spectacular ninety-two-foot stainless steel Venus in San Francisco. However, the biggest change in Lawrence's work happened when Quinn and Cameron were born. Lawrence was a proud father and his work became more playful, colorful and toy-like.

Contributions as Teacher
Lawrence was not only a teacher to his students, the faculty learned from him as well. He was the first artist I met who knew how to use the ancient paint medium of encaustic, that I later used in my own paintings. One of his encaustic paintings is published in The Art of Encaustic Painting: Contemporary Expression, a book I show students when I teach encaustic. He was also a masterful drawer and taught intermediate and advance drawing.

When he arrived at DU, the sculpture classroom was in need of safer equipment—a few years prior to his arrival, there was a fire. Lawrence was creative in how he lobbied the University for more funds to upgrade the classroom. He did this by putting yellow police tape all over the classroom so that it looked like an art installation. It was a serious statement that the classroom was a potential "crime scene." The University took notice and Lawrence received the funds needed.

Lawrence and His Students
Lawrence was greatly respected by his students and he had high expectations of them. His students worked hard to meet his expectations creating art with strong concepts, form and craft. Lawrence believed in his students' abilities and taught them the skills needed to succeed. He created a challenging and exciting atmosphere in his classroom that encouraged risk taking, curiosity, thought and expression.

Lawrence's Legacy to the School of Art and the University
Lawrence also had high expectations for the art faculty, but he respected our work and our ideas, and believed in our abilities and wanted us to have opportunities to create our best possible work. In the 90's, he lobbied the University to designate special funds for the art faculty to create more ambitious art. As a result, the Creative Art Materials Fund (CAMF) was born. This fund enables the art faculty to buy expensive art materials and equipment to create art we could only dream of before. The CAMF award has helped us create some of our best work that has been exhibited nationally and internationally. With the creation of the CAMF award, the University has increasingly recognized art-making as creative research and we now have other opportunities that support our art.

Lawrence also helped our gallery improve and receive more public attention with stronger exhibitions and physical improvements. Because of his efforts we eventually received a donation from Vicki Myhren to renovate the space.

Because of Lawrence's efforts, the University's culture and attitude towards the visual arts has changed. We are in debt to Lawrence for his efforts which will continue to positively affect the School of Art & Art History, the art faculty, the art students, and the University long into the future.

Lawrence's Art Transforms Denver
As Lawrence's public artworks sprang up throughout Denver, the city was also changing. The growth of Lawrence's art in Denver parallels the growth of the city. I strongly believe the Blue Bear  helped jumpstart that growth at a faster pace. As his work became more playful, it became more universal, appreciated and loved by people of all ages and walks of life. Because of Lawrence's work, the city and its residents have a better understanding of contemporary art.

Our city has become a more exciting and welcoming place to live with young professionals and companies relocating here. Lawrence's work has helped change the cultural and physical landscape of our city. Young adults from across the country want to move here, young people who were born here leave and return, and young people who come to our universities want to stay.

Although Lawrence's public art became more playful and universal, his work is not mere entertainment or decoration. His work always has mystery and asks subtle questions. The Blue Bear, titled I See What You Mean may have been prophetic. Lawrence said the piece reflected a concern that with more development the mountain "fauna" were being pushed out of their habitat. As the big Blue Bear looks through the huge windows at the convention center, what does the Bear see? Too many of us? Too much traffic? Too much pollution? Or a homeless man sleeping? When the Bear says "I See What You Mean" who is the Bear talking to? Another bear? Or us? Lawrence was a visionary artist who helped reshape our city, but with Lawrence's passing, I hope we will spend more time with his work to enjoy it and contemplate its meaning.

Whispers in Snow
A few days after Lawrence passed, I took my oil painting class outside to see Lawrence's sculpture Whispers at DU. Whispershas three huge lips carved into marble that people sit on. There are also five towers with big bronze lips balancing at their tops. I told the students the lips were originally casts of DU student's lips. I discussed the digital process and that the casts of the lips were then scanned and the digital files were used to carve the marble and cast the bronze. It was a cold day and snowing, and the white snow partially covered the lips, softening their shapes. The students stood quietly in the falling snow looking at different parts of it. The scene was ethereal and surreal and an experience the students will remember. Later one student was so inspired she added falling flakes of candy-like snow in her painting.

Green Grass in Englewood
Lawrence's piece titled Vivere is a tall sculpture of blades of green grass made of painted steel. It is located on South Broadway and was created in 2003. A humbler piece, but no less elegant, the sculpture marks the border of Englewood. Before the sculpture few people driving down Broadway knew when they had left Denver and entered Englewood. I live in Englewood and the little city is getting discovered, and is changing and growing, with young people and businesses relocating there. Vivere is Latin for "be full of youthful vigor." Maybe Lawrence was prompting Englewood to jump up and get going, and it finally is.

Once, when I was driving towards Vivere, I saw the tail of a coat blowing in the wind and when I passed the sculpture I saw it was Lawrence bent over working between the tall blades of metal grass—maybe he was gardening? Whenever I leave DU after work and drive past the green grass, I begin to relax because I know I am close to home, and sometimes, I silently thank Lawrence.

"Lawrence Argent was one of two faculty who interviewed me for my position at a professional conference in Boston in 2006. I was immediately impressed by his energy and enthusiasm about every aspect of making art.

"As a colleague (even when we disagreed), I loved his high standards, and his desire to have our school succeed on every level. He especially wanted each student to feel as strongly about art, and to get as much pleasure from it, as he did."

Deborah Howard, painting professor at DU and a 25 year colleague of Lawrence remembers:

"For Denver, his participation helped bring a heightened awareness of contemporary art to our city. I See What You Mean (the blue bear) is art that is accessible and speaks to everyone. We thank Lawrence for that gift."

"Lawrence has had a huge impact on DU. During his tenure, he has been an inspiration to many aspiring student artists and his fellow faculty. I'm so grateful for his contributions to our community. He will be sorely missed, but I'm glad he was able to devote all of his time to art creation so that more people across the world can experience his work."

"We've lost a wonderful colleague and an artist who was reaching new heights with his art. Lawrence was always enthusiastic, always passionate, and truly demanding of himself. Despite his intelligence and imposing presence, he moved through life with humor and warmth.

"I got to know Lawrence not only as an artist but as a teacher, when I took his course on digital sculpture—an area where he was absolutely in the forefront internationally. I came to appreciate that he really understood how combining traditional and advanced technologies could help create art that was truly moving.

"Lawrence's piece on the DU campus, Whispers, is a touchstone that reminds us that listening is more important than speaking. His concern was always with the human being, and the interactions between us. In the end, I think those were always the subjects of his art."