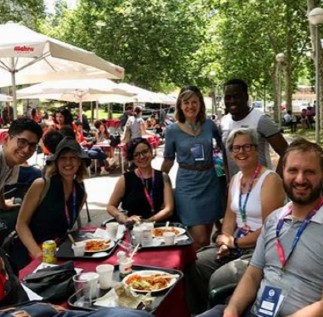 Coppini nicely summed up the experience of his first IAMCR conference, noting that he appreciated that "the atmosphere was very international and there was a focus on research perspectives and methodologies that I usually don't get exposed to, with more attention to media studies research and qualitative methods compared to other conferences that I usually attend."

Below is a brief synopsis of the research the faculty presented, and a few photos of the fun they had bonding over research ideas as well as food, art and mastery of the Spanish abanico—crucial for beating the heat. 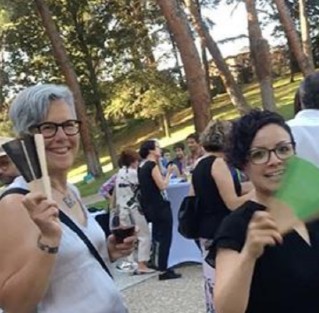 Lynn Schofield Clark presented "Growing up tracked: Partnering with young people to explore Tik Tok & the mobile repertoires of young people." In this presentation, which was for the Audience Studies division of the IAMCR, she discussed a project she worked on with Carlos Jimenez over the summer in which they looked at the methodological question: How do we study not only the mobile media use of youth, but how do we study mobile media use with youth? Highlighting the ways youth culture is commercialized on the popular social media platform Tik Tok, she argued for incorporating digital media literacy into studies of youth and raised questions about how an approach of mutuality in participatory research might change the work of audience researchers. 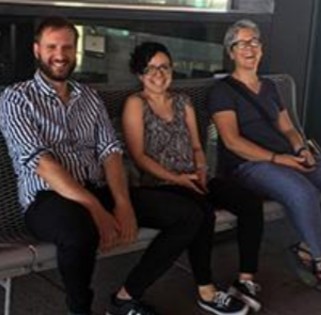 David Coppini presented a paper titled "A battle of identities: Mass media and the rural-urban divide in American politics," analyzing American media publications across the ideological spectrum in urban and rural areas. Among the major themes discussed among urban areas were economic opportunities offered by cities, progressive politics as well as concerns about crime. The themes discussed in rural areas included misgivings related to whether these areas are being left behind, concerns of conservative politics and a focus on guns and religion. He also discussed differences in representations for FOX News and MSNBC, and the implications of these findings for theories of selective exposure and social identity.

Lauren J. DeCarvalho's presentation, "Visibility Behind Bars: Wentworth's Portrayal and Inclusion of Australian Indigenous Women," argued that the prison drama carves out a much needed space on television where viewers can see Australian Indigenous women in prominent, humanized roles. Looking at three particular characters (Doreen Anderson, Rita Connors and Ruby Mitchell), she used a combination of feminist textual analysis and formal visual analysis to discuss how all three women are complex, major characters who assert agency over their sexual lives, foster positive familial, friend, and/or romantic relationships, and reify the importance of encouraging female solidarity. At the same time, she discussed how the creative team behind "Wentworth" does not afford the same opportunities to its minor Indigenous characters.

Carlos Jiménez's presentation, "Radio Indígena and Indigenous Mexican Farmworkers in Oxnard, California," discussed the digital strategies of indigenous Mexican farmworkers as they worked to combine community radio with social media. Most of the scholarly work in this area has focused on mainstream radio, and Jiménez's work shifted the focus to look at grassroots and community practices of their digital strategies. Radio Indígena has significantly fewer resources than mainstream radio stations and in some cases technological and language barriers. Despite that, his work shows they are at the cutting edge by blending farm visits, emergency updates of wild fires in the area, and promotion of programs and events. Jiménez noted that it is important for him to highlight the contributions that minority communities make to the development of media technology. 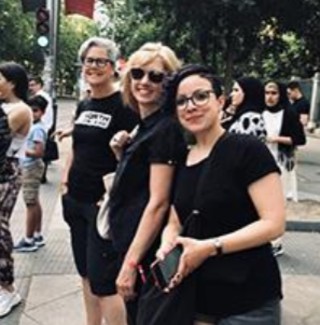 Erika Polson's paper, "Street art on Instagram: The audience as star of the urban 'story'", explored how street art 'audiences' produce online media with themselves as star on Instagram. Using a specific "art district" in Denver, Colorado as a case study, this paper followed a variety of images as they circulate on Instagram through stories that re-center the art to spotlight the audience-as-subject rather than the artist or artwork. Considering the gentrification that has accompanied the city's encouragement of art districts, Polson pointed out that while some may celebrate how people can use the art to interact in new ways with an urban environment, it is also worthwhile to examine such participation in a broader social and economic context, one that perhaps suggests a more ethical role for the audience. This project won the Honorable Mention for IAMCR's Urban Communication Research Award.

After the main conference, Lynn Schofield Clark, Carlos Jiménez and Erika Polson went to nearby Segovia, Spain for a post-conference on Mobile Socialities, where all presented and Schofield Clark and Polson were among the keynote speakers.

Jiménez presented his work with day laborers in Denver, which examines how the information stored on mobile phones forms a unique form of sociality and memory.

Polson's talk examined mediated discourses around the growing "digital nomad movement," arguing that although they make up just a fraction of the millennial generation, the rarely-questioned status attached to digital nomad lifestyles in mainstream and social media indicates that a recognizable "mobile dream" is emerging based on travel and continuous movement, lack of place-based commitments, and convergence of labor and leisure.

Finally, Lynn Schofield Clark proposed the concept of "anchoring narratives" as a way to think about how young people use their mobile phone cameras to leave clues for themselves that they sometimes share with others about who they are and how they have behaved, creating an aspirational self-narrative that anchors them.