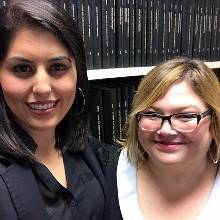 This is not your typical Hollywood vampire love story. Bernadette Calafell and Shadee Abdi were captivated by the story of an Iranian vampire in A Girl Walks Home Alone at Night and how the film flips the script on the Middle East, feminism, and what it means to be labeled a monster.

Calafell, a professor of communication studies, had just finished teaching her Monsters and Pop Culture class — where she asks her students to question traditional representations of monsters — when she and her PhD student advisee, Abdi, saw A Girl Walks Home Alone at Night together with a group of colleagues. They both knew immediately after watching the film that they wanted to collaborate on an article.

Not only was the film visually striking, but it also presented layers of complexity and meaning, including the representation of an Iranian woman — who also happens to be a vampire — being empowered by her chador, a long, loose full-body cloak.

"Normally these women are seen as victims and this film was such a disruption of that narrative," said Calafell.

"She's kind of a superhero ( ... ) really trying to do good and fight the patriarchy," adds Abdi.

For Calafell and Abdi, it was the perfect case to examine. As a professor and author, Calafell brought a deep knowledge of monstrosity and queer utopias, while Abdi provided her personal Iranian-American perspective, the ability to translate cultural nuances and Farsi, and her own scholarly expertise on Iranian women and feminism.

"I wanted to work with Shadee because she is such a strong scholar and has an intimate relationship with the culture," said Calafell. Working collaboratively came easily, as the two had already established a relationship as advisor and advisee.

"I chose DU specifically because I wanted to work with Bernadette," said Abdi. "She is one of the best people I've ever collaborated with, in that she is really open to ideas, she is well-published, and she is one of the great voices of cultural communication."

Their collaboration also provided Calafell an opportunity to further mentor Abdi on how to publish her work, increasing her competitive edge upon graduation. Getting their article published was a challenge at first. They faced rejection on their first attempt and multiple revisions on their second attempt. They had to make significant decisions about what to cut or change, and ultimately, what was most important to them.

"Bernadette really worked with me to develop my skills, guided me through tasks I hadn't been asked to do before, and trusted me to make decisions about what was most important. It was a very positive back and forth of learning, mentorship, and collaboration," said Abdi. "It gave me hope that I can be the kind of collaborator and mentor for my graduate students when I am fortunate enough to be in that position."

Through this process, Calafell and Abdi were forced to think beyond their own preconceived ideas. It pushed them to produce an even stronger article, one that challenges others to question their own perceptions.

"It's important to me to change the narrative around the Middle East and North Africa in general, and how we perceive it and how it is written about in research. And for me, it's really important to reframe these conversations in a way that is not demonizing of the region or the culture as a whole. It's my culture," said Abdi.

"The biggest thing I was hoping to accomplish with the article was to get people to shift the popular frame away from Middle Eastern and North African women as victims or lacking agency," said Calafell. "And, to get people to think about challenging the images of what a vampire could be, that every day monsters could be more than just what they immediately look like."