As an artist, Deborah Howard has exhibited all over the world. Themes of Jewish history and identity are central to her work. Last summer, Howard completed the most ambitious project of her career with a solo exhibition, Migration and Memory at the Jewish Museum of Venice, Italy. 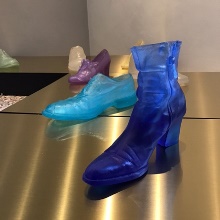 Shoes are a common motif in Howard's work—she describes them as "the only garment that can stand independently, like the living being that stands inside the shoe." In Migration and Memory, Howard incorporates the motif of the shoe to trace a journey of the individual wearer to the universal phenomenon of human migratory flows.

Howard first visited Venice as a student backpacking through Europe, kindling an enduring interest in the city. She has since accompanied DU students to study its rich artistic heritage. The work that became Migration and Memory started to take shape in 2014, when she spent a month living in the Venice Jewish ghetto and doing creative historical research. Established in 1516, the Venice ghetto was the earliest in Europe, and the term "ghetto" is actually derived from a Venetian word.

"The power of the ghetto is palpable; time is frozen within its 16th-century entryways and walls. Living in the ghetto, I came to realize that my work is no longer merely Jewish, but universal, and as a result, stronger," said the associate professor of studio art.

Migration and Memory addresses a theme that is central to Jewish populations in diaspora all over the world, but also central to the history of Venice, which has been at the crossroads of trade and migratory routes for centuries and is, in many ways, the original melting pot. Jewish cemeteries in Venice and on the Lido testify to the diverse origins of Venetian Jews, coming from all over Europe and the Middle East.

"Migration is a natural and universal process that humans have engaged in since the beginning of time in order to survive, thrive, evolve, and change," said Howard. "However, immigration and emigration are artificial, political processes, created by national boundaries, and feeding conflict and persecution."

Howard returned to Venice in 2016 to find an exhibition space for Migration and Memory. That year marked the 500th anniversary of the Venice Ghetto, and she found the perfect venue for her project. The Jewish Museum of Venice, located in one of the three synagogues in the Ghetto and looking to complement its historical collection with contemporary and universal interpretations of Venetian Jewish history, invited Howard to expand her original concept and fill two separate galleries. 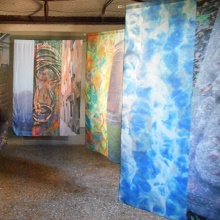 Back in Denver, Howard explored new artistic techniques, working with a printer in California to print images on silk, and with a glass factory in Iowa to produce the glass casts of 12 vintage shoes. From designing and constructing display platforms for the artwork, having shipping crates built and coordinating the shipment of her work to Venice, a city made up of islands with access only by water, Howard found the project more complicated than anything she had undertaken previously, so she hired a project coordinator to handle the shipping logistics.

In order to finance the ambitious project, Howard received funding from numerous grant programs, including the AHSS Creative Arts Materials Fund and the Walter Rosenberry Fund, the AHSS Clemens Award, the Anna Maglione-Sie Endowment in Italian Studies, as well as funding from the School of Art and Art History and the Office of Internationalization.

Migration and Memory consisted of three main components exhibited in the two galleries. The contemporary gallery featured a large wall sculpture made of cast aluminum with vintage women's boots moving in and out of the surface like schools of fish moving through the water of the polished metallic surface, and twelve worn, vintage shoes cast in different colors of luminous glass arranged on a polished brass platform. The historical gallery, called the "Antique Sukkah," featured several translucent silk panels printed with photographic images from the Ghetto and the Jewish cemetery on the Lido, juxtaposed with Howard's abstract paintings.

Howard had originally planned to exhibit the glass shoes in the historical space, but found the gallery lighting limiting and decided to move them to the contemporary gallery and hang the silk panels in the Antique Sukkah. She called the result "better than anything I could have imagined or planned. The natural light on the fabric coming from one window, the quiet of the old room and the context of the Ghetto outside gave the installation its magic and life," she said.

The exhibited work also tied into the historical context of the room, which in the 18th century had been used during the Jewish festival of Sukkot, when temporary huts or tent structures called "sukkah" were built—usually outdoors, but outdoor space was limited in the Ghetto—to commemorate the time spent by the Israelites in the wilderness. In an ingenious solution for the reality of the ghetto, this room had a ceiling that could be opened up to the sky.

Howard's work on Migration and Memory was accompanied by personal challenges, as she cared for her terminally ill mother, who sadly passed away shortly after the exhibit opened in Venice. One of the glass-cast shoes in the piece, a luminous blue woman's boot, belonged to Howard's mother. It bears witness to her personal migration to the United States, anchoring the global phenomenon of migration in the personal and individual experiences that live on in memory.

The Venice Ghetto is a continuing source of inspiration for Howard. While installing her show, she was able to access the women's balcony of one of the old synagogues adjacent to the museum through a door in the Antique Sukkah gallery. Looking down into the synagogue through the shuttered windows of the balcony, Howard had "the same perspective as the women and girls who, for hundreds of years, saw their husbands, fathers, brothers and sons praying in the synagogue below." In new work, she plans to explore the female Jewish experience in a series of photographic images taken from women's balconies of other old synagogues.

Howard will discuss her project and her creative process in the context of migration, immigration and emigration at the DU Internationalization Summit in April 2018.