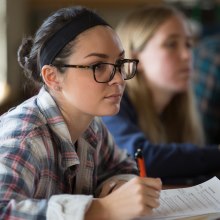 In March 2017, eight AHSS faculty joined a Judaic Studies visiting scholar for an intensive interdisciplinary panel on stereotyping and the politics of hate. Born from that panel discussion was a new interdisciplinary course that will enable undergraduate students to study with faculty from the original panel, as well as others across AHSS.

"The conversations and connections that evening [in March] were powerful; it was clear on that night that the panel was the first step in something much larger, even though we didn't know yet what that would be," said Sarah Pessin, professor of philosophy and Judaic Studies, and 2017 recipient of the DU Faculty Service Award.

Within a couple of months, Pessin and co-collaborator Andrea Stanton, associate professor of religious studies, submitted a proposal and received funding from the Enhancing and Expanding the Learning Environment cluster through DU Impact 2025 to create a new, interdisciplinary AHSS course series aimed at increasing diversity and inclusion in the undergraduate curriculum.

The pilot course, "Stereotyping and Violence in the U.S. Today," launched this fall. It features seminars by 15 speakers including a local digital storyteller, a local Holocaust survivor, and 12 AHSS faculty members from various disciplines. Lectures address a range of socially and politically pressing topics, including stereotyping and trauma in Native American communities, nativism and anti-Latino sentiment, gender and rape culture, borders and migrants, racism in the news, digital practices, and intercultural communication.

To involve others in the conversation, many of the course lectures will be released as a podcast, and on November 14 (4:00-6:30 pm) the course will host a public panel with talks by Stanton and Pessin on the themes of Islamophobia and Anti-Semitism.

"This is an incredible new venture for DU. I've always thought we should be encouraging innovative approaches to team teaching, which should be a mainstay of DU academics rather than an occasional project that has to overcome longstanding institutional barriers," said Arthur Jones, professor of music, culture and psychology, whose topic will focus on the unheralded legacy of African American song traditions in countering stereotypes and cultivating justice.

"This new course reflects a growing trend in scholarship and teaching, to break down the silos that separate scholars in different disciplines," said Stanton. "I think the willingness of so many faculty members to be involved in this course is also a very positive testament to the passion that DU faculty bring to their teaching, and to the desire for innovation that characterizes many of our courses."