Past to Present: Making Sense of Diet and Health 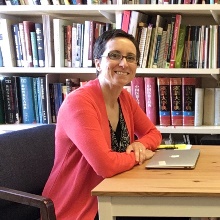 Have you ever noticed that there is no cheese or cream in Chinese food? Historically, dairy has not been a large part of Chinese diets. One explanation scholars offer is that Chinese populations tend to have higher rates of lactose intolerance—or the inability to digest a sugar in milk.

This curiosity led Hilary Smith, assistant professor of Chinese history, to read and learn more about milk in Chinese diets. What she found is that as most human beings and other mammals are weaned as babies, their bodies stop producing the enzyme that breaks down lactose. In fact, nearly 75 percent of the world's population is lactose intolerant, yet it is considered a deficiency.

Smith wondered why the typical occurrence of lactose intolerance is now perceived as an abnormality.

"The short of it is that lactose tolerance is disproportionately found in people of northern European descent, and scientists investigating diet and nutrition in the 20th century were disproportionately of northern European descent," said Smith. "So the scientists took their unusual condition to be the norm, and saw those who didn't share it as outliers."

Much of her research follows a similar theme of questioning knowledge and authority to cultivate new or different ways of seeing the past to better understand the present.

In her recent book, Forgotten Disease: Illnesses Transformed in Chinese Medicine, Smith follows the history of the ancient disease known as "foot qi" from the fourth century to present day. Her examination celebrates the intricacies of traditional Chinese medicine, developed well before modern medicine, and challenges the notion that the West saved the Chinese from age-old afflictions, but argues that in many cases, Western imperialism instead exposed the Chinese to new illnesses.

"I enjoy moments like that in my research, where I experience a gestalt shift and suddenly see how strange my own modern, scientific way of looking at something is," said Smith.

While her research and collaboration with other historians is a significant part of her work, Smith attributes her work in the classroom as an avenue for learning and finding new revelations as well—not just for students, but also for herself.

"Working with students helps me ask new questions, see what is unsatisfactory about old answers, discover sources I had not come across before, and express ideas more clearly. So I really see teaching as part of the scholarly enterprise, and students as partners in creating knowledge," she said. "It's great to share their excitement as they discover new things."

For Smith, one of the most meaningful parts of her job is the mentorship she is able to provide seniors working on their capstone projects. As she explores together with her students a topic of their choosing, Smith has the opportunity to get to know them as individuals and as scholars.

"By the time they finish their theses and present them publicly, they have become the experts on their particular topics," she said. "As a mentor, I feel so proud and happy for them, having seen up close the long and often difficult process they've gone through to get to that point."

When she isn't in the classroom or mentoring students, Smith is working to disrupt the familiar through her own research.

Her new book, still in progress, focuses on the history of nutritional knowledge in China. She plans to examine early 20th century perspectives on sustenance, such as Buddhist vegetarianism, Daoist longevity-promoting diets, and folk beliefs about the properties of foods.

"I think that overlooks how traditional beliefs about healthy eating have persisted and coexisted with scientific ideas—and sometimes have even informed them," added Smith. "What I'm hoping to do with this book is complicate the way people typically understand the history of nutrition science."