In ‘Ghost Of,’ poet Diana Nguyen meditates on loss and her family’s past 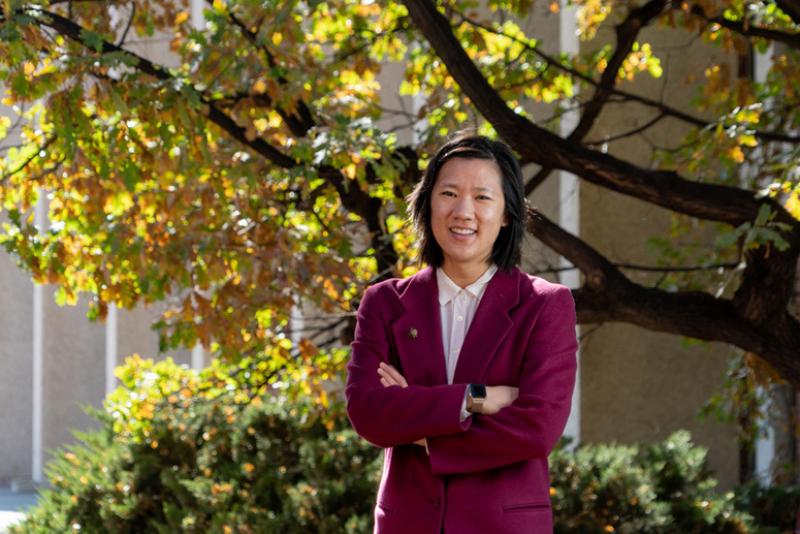 With “Ghost Of” (Omnidawn, 2018), her debut collection of poems, Diana Khoi Nguyen has bedazzled the critics and found herself blinking in the literary limelight.

In September, just months after its April publication date, Nguyen learned that “Ghost Of” had been longlisted for a National Book Award. A few weeks later, the book had advanced to the five-book shortlist, giving it a healthy chance at capturing one of the highest honors any book, much less a first book, can receive.

“It’s crazy,” says Nguyen, a fourth-year PhD student in DU’s creative writing program, a multimedia artist and a teaching assistant professor at the Daniels College of Business. “I still don’t really understand. There are moments when I’ll be walking the dog, and I just go, ‘what?’ I’m just totally baffled. I’m so totally grateful. But how did this happen?”

However it happened, it becomes red-carpet real next week, when Nguyen heads to New York for the Nov. 14 National Book Awards presentation. There, she’ll mingle with some of the nation’s hottest talents in the categories of fiction, nonfiction, poetry, translated literature and young people’s literature. In what she considers the unlikely event of a win, she has remarks prepared. Just in case.

Whether she wins or simply sits next to the winner, the whole experience is both exhilarating and bittersweet. “Ghost Of” is, after all, a meditation on a tragedy — her brother Oliver’s suicide and the toll it exacted on her family. She began the work as a way of coming to terms with the loss. “I didn’t want it to be a retraumatizing experience for me, but a bridge, a way to begin to honor and think about him and to think about our past,” she says.

Nguyen began her studies at DU some months following Oliver’s death in December 2014. Until a class taught by associate professor Selah Saterstrom of the creative writing faculty, she had postponed wrestling with Oliver’s story.

“One assignment was to write a radical eulogy,” she says. “I had been really avoiding my brother’s stuff. [But then, as part of the course assignment,] I built a cardboard coffin and laid in it every day for like 10 minutes. It was very meditative. I wanted to retrace his steps in death.”

Later, in August and December of 2016, the bulk of “Ghost Of” materialized on paper.

“Every writer has their own process,” Nguyen says. “I only write twice a year. I only write for 15 days in the summer and 15 days in December — because winter break is in December. It’s really crazy. But I don’t write outside of those times. When I’m teaching, or when I’m a student, I’m 100 percent a student, and I’m 100 percent a teacher. I can’t split my brain. I can’t do it.”

Between those 30 sunrises and sunsets, Nguyen aimed to write a publishable poem a day. She experimented with form and hovered over photos that signaled a looming crisis. Two years before Oliver’s suicide, she says, he got up in the middle of the night and gathered every family picture hanging in the house. Then, with an X-Acto knife, he sliced himself out of each image.

“It was like a careful rage,” Nguyen recalls. “He didn’t smash anything. But he put them all back. We never talked about those pictures. My parents never took them down. They hung all the way up to his death. They hung even after his death.”

Nguyen contends with the emotional weight of those photos by incorporating them into a series of “Triptych” poems scattered throughout the collection. In each, a defaced photo serves as the lead element, showing the family flanking a conspicuously empty space. The other two elements embed text within and around a silhouette of the departed Oliver, thus filling him in and pointing to his absence.

Beyond examining her brother’s experiences, “Ghost Of” also reflects on Nguyen’s family’s history. Her parents came to America as refugees, having left Saigon in the chaos of the war’s denouement. Along the way, Nguyen says, they lost their homeland and any assumptions they may have had about their future. Their trauma had ramifications for their children, and in many ways, Nguyen says, “Ghost Of” delves into the “faultlines within the family dynamics.”

Saterstrom, who directs the creative writing PhD program, lauds Nguyen for her remarkable explorations of the human experience. “Diana’s work is able to locate the invisible pulse that animates the mystery of loss and recovery,” she explains. That’s a sentiment echoed by others. Poet Cole Swenson, who taught at DU for six  years before moving to Brown University, hails “Nguyen’s stunning first collection” for exploring “the layered losses of displacement, migration, and death in ways that take full responsibility for the particularity of each individual’s experience.”

In the months since “Ghost Of” was published, Nguyen has returned to individual poems at readings and events, but she has been slow to plunge into the book as a whole. On the one occasion when she read it from cover to cover, she was struck by her response.

“You know what I felt that I hadn’t experienced before was a lot of sympathy for me. Not me as a writer, but me as a woman, me as a sister, a daughter,” she says. “That wasn’t something I think I had before I wrote the book—and before I read the book.”