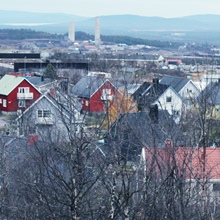 In the summer of 2016, Nicole Miller traveled to Northern Sweden to research a recent land victory of the indigenous Sami people. Land right victories are rare in the history of the Sami, and she wanted to learn more about it.

When Miller arrived in the Swedish town of Kiruna, she learned of another impending problem—the towns of Kiruna and Malmberget (120 km south of Kiruna) are sinking.

Due to neighboring mines, the towns' foundations have been destroyed. The town of Kiruna has already begun the 20-year-long process of being relocated 3 km east.

"I couldn't help but be interested in this issue, and it has received little coverage in national and international media. Stories that do mention it treated it more like a quirky event rather than the result of 100+ years of preventable, environmentally destructive practices," said Miller, a fourth-year anthropology and studio arts major.

Miller received an AHSS research grant in the summer of 2017 to travel to the second town, Malmberget, and continue her research into the effect the literal transplantation of the town is having on its inhabitants. She hopes to study both the towns and the environment around the towns to envision what the land might have looked like before the mines existed.

"I feel the intersection of corporate interests, urban development, indigenous land, and the environment are complex and quite interesting. Photographically comparing these different perspectives has helped a lot to give added perspective that wasn't possible with writing alone," she said.

Miller's research stems from a course on human rights of indigenous peoples that she took during her first quarter at DU.

"Researching the overlooked issues and rights of indigenous people is a very tangible way to apply anthropology to the real world," she said. Her first project was to investigate the Nicaragua Canal project and the intersection of development and indigenous land rights on the Eastern side of Nicaragua. She later became interested in the Sami as she was reading about them in preparation to study in Sweden.

Although indigenous rights were the starting point for her projects, it was the environmental issues that became the main focus.

"For the project in the north of Sweden, I have been writing about how the typical presentation of the arctic as that of empty, snow-covered plains is not completely accurate. This presentation has in fact contributed to a lack of corporate concern for the environment because of the myth that there is no one and nothing there," said Miller.

"As my photos show, there are landscapes that are unique, diverse, and aesthetically pleasing, but also often without snow. Just because there is a blanket of snow does not mean it is an empty, unimportant place."

Last year, Miller studied at one of DU's strategic partners, Lund University, in Lund, Sweden. She took classes in the Visual Culture master's program, which focuses on the study of the image and its production, use, and effects on culture, an area that perfectly encapsulates both the artistic and the anthropological area that Miller is interested in.

"The courses helped give me a greater ability to consider the effects and readings of the images that I am producing," she said.

Miller also studied Swedish while at Lund, which helped with her research as it allowed her to talk to people as well as read newspapers and other research topics in Swedish.

Following graduation this winter, she hopes to continue in a master's program in either Visual Culture or Human Ecology at a university in Scandinavia.

"I am interested in possibly getting a PhD as well as working on photojournalistic projects, perhaps for an NGO [non-governmental organization]." Miller's ultimate goal, whatever she is working on, is to help implement positive change in the world.