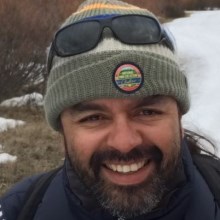 Alejandro Cerón was in his fifth year of medical school when Hurricane Mitch struck Guatemala in 1998. As a student leader at the University of San Carlos, Guatemala, School of Medicine, Cerón coordinated the student emergency response team to the hurricane and the flooding aftermath. Although he was on track to becoming a surgeon, the experience reshaped his future.

"I spent two weeks barely sleeping, involved in this, and by the end I had decided I did not want to be a surgeon but to work in public health," said Cerón, assistant professor of anthropology.

While this was a defining moment, the seed had been planted years before when Cerón was a first-year medical student. A class on the social and cultural aspects of health, and the opportunity to get to know Guatemalan anthropologist Elba Villatoro, put anthropology on his radar. As did his work with a student group that brought medical consultation to remote rural areas of Guatemala.

"I participated as an assistant to the physician during the consultations, and became fascinated by what I perceived as a degree of miscommunication, where physicians were looking for a clear diagnosis, but patients were telling the story of their lives," said Cerón. He began reading books on anthropology and spending more time with students in the anthropology department.

After Hurricane Mitch, Cerón changed his electives from surgery to public health. By the time he graduated as a physician in 2000, he had taken two semesters in anthropology, and was committed to working as a rural physician, doing public health work informed by anthropology and other social sciences.

In 2001, Cerón began working as a physician for an organization tasked with expanding health coverage to remote rural areas. At the same time, he was studying for his master's in public health and was getting to know people who were leading important conversations about Guatemala's health system. It was clear to him that the country's history of structural racism, which contributes to health inequality, needed to be addressed at every level, including clinics.

In 2003, he was responsible for coordinating a team of 35 health workers in the implementation of a healthcare model for rural Guatemala. The team tried to determine how healthcare services and healthcare workers should do their work if they are aiming to promote the right to health, anti-racism and feminism.

"The work involved a lot of research and reflection with some of the most brilliant people I have worked with," said Cerón. "It made me realize that social sciences were needed to improve the health system in Guatemala, but there were not enough social scientists interested in getting involved, and that I had the motivation and skills to becoming one."

In order to continue the work and fill the knowledge gap, Cerón enrolled at the University of Washington, Seattle, and earned a PhD in anthropology in 2013. He maintains formal and informal collaborations with organizations and people in Guatemala.

"My overarching interest has to do with promoting the right to health, so I collaborate informally with people working in that direction," he said.

Cerón's research involves discrimination in public health care facilities, improving access to medicines, and pediatric chronic kidney disease. A current research project, "Chronic Kidney Disease among Children in Guatemala," is in collaboration with the foundation for children with kidney disease (FUNDANIER, Guatemala) and aims to understand and improve the experience for families of children with the disease.

"This project has some clinical implications—improving adherence to treatment, reaching out to certain families to support them, but also some policy implications—how to improve availability of certain medications, or how to improve availability of health care in rural areas. Additionally, this project is exploring if there may be unconventional causes of CKD among Guatemalan children," Cerón said.

As a researcher, Cerón is interested in the link between public health practice and health as a human right. In his dissertation, he recommends two clear goals to improve the health sector and the health of all people in Guatemala: promoting social participation and reducing health inequalities, "which are not goals the health sector has," he said.

"A book based on my dissertation will be published in Guatemala in a few months and I am eager to see if there are any interesting conversations around my findings and recommendations," he added.

Cerón joined the faculty at the University of Denver in 2013. One of the side effects of getting his PhD and working as a teaching assistant was discovering a love for teaching.

"I enjoy the energy and curiosity that students bring, which I consider the essence that keeps us all in constant movement. And I enjoy the magic that happens when we all interact in a classroom or in an advising meeting that makes us all grow together," he said.