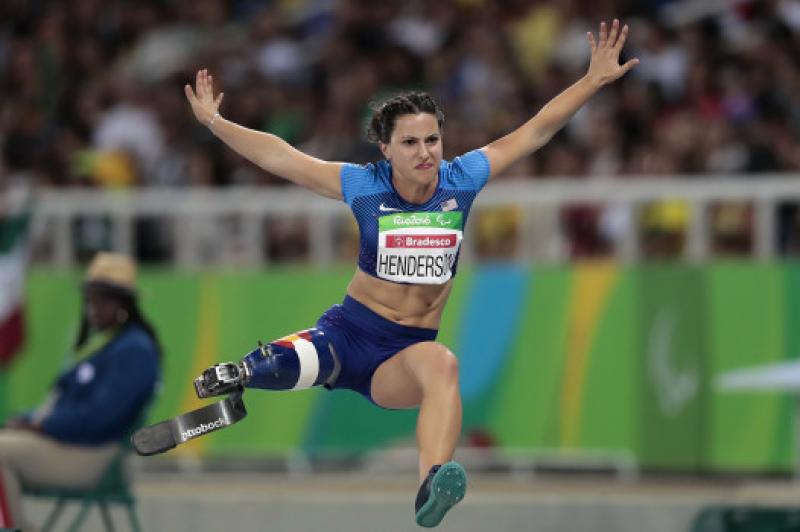 Finally, Lacey Henderson gets to ask the questions. Lord knows she’s used to answering them.

“What happened to you?”

“How did you lose your leg?”

“Isn’t it amazing how far technology has come? It’s like you’re not even disabled!”

As an amputee, a Paralympian and an advocate for people with disabilities, Henderson (BA ’11) has done her share of the talking. The University of Denver alumna has delivered TED Talks and made public appearances and answered the questions of countless gawkers.

But now, as host of “Picked Last in Gym Class,” a new podcast focused on humanity and humor, Henderson is ready to start listening.

“It’s very refreshing [to be on the other end],” she says. “I don’t mind speaking and telling my story, but I know how it ends.”

For those who haven’t heard, here’s a quick refresher: In 1999, doctors found a lightbulb-sized tumor behind her right kneecap, the product of a rare, deadly soft-tissue cancer called synovial sarcoma. When she was just 9 years old, surgeons amputated her leg 6 inches above the knee.

As a motivated child in a family that refused to see her as a victim and as the daughter of a master’s national champion decathlete, Henderson rose to the occasion, earning a cheerleading scholarship at DU, setting world records in the pole vault and American records in the long jump on the way to the 2016 Paralympic Games in Rio de Janeiro. (Ironically, the future athlete was actually picked last in gym class once after returning to elementary school.)

Along the way to prominence, Henderson appeared in commercials and worked as a motivational speaker and model. With another Paralympics on the horizon, she’s still training hard athletically. But she couldn’t pass up the opportunity to exercise a different skill set as podcast host.

“I was excited for a change of pace,” she says. “A lot of the things I bring up in my speeches do open up interesting conversations. And I wanted to be able to use my story and my experiences to weave parallels with other people’s lives.”

Henderson’s story, not surprisingly, comes up. In its video versions, her prosthetic right leg is not hidden. And some of the comedians, athletes and entrepreneurs who appear on the show have battled disease or disability.

But Henderson was adamant from the start: This would not be a disability podcast. 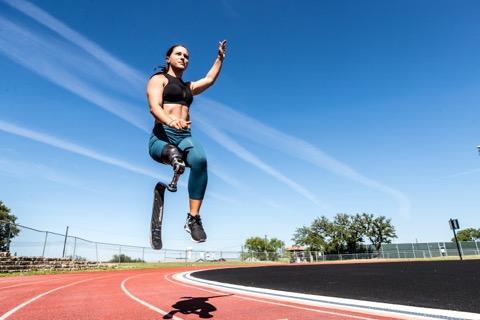 That’s on brand for Henderson and her advocacy. People with disabilities, she likes to say, are simply people, representing the “world’s largest minority” at 10% of the population. Her amputation is a major part of her identity, but it’s far from the only part. The trauma and emotional burden feels much more distant. (“What relevant thing happened to you 20 years ago?” she sometimes wants to ask people.)

“I think to promote any type of change, you need people from outside communities to listen and understand,” she says. “Even members of my family still say, ‘You don’t seem disabled; you seem normal.’ And that’s the point.

“So often people with disabilities are painted as inspiring stories. That’s all great, and they can be an inspiration to someone. But they’re also people who live their everyday lives and have to go to the DMV. We all have these human experiences. I think finding that is what’s important: for people to be able to see themselves in somebody whose life experiences are different and realize that we still experience most of the same things.”

Which is not to downplay the role of the amputation in her life. Losing her right leg, Henderson acknowledges, undoubtedly opened doors for her that otherwise would have remained closed. She has had the chance to compete on the world’s most prominent athletic stages. Her voice has carried around the world. Living with a disability has shaped who she is today.

“There’s absolutely no way I would be where I am or who I am without it,” she explains, “but it also didn’t dictate. It was never the boss. I was always the boss.”

Right now, the boss wants one more shot at athletic glory. After earning a silver medal at the Parapan American Games in Peru last month, Henderson has her sights set on the 2020 Tokyo Paralympics. But she also realizes that there is more to her life than long jumping and pole vaulting.

“Regardless of team selection, regardless of [my] performance at Tokyo, I’m at a place now where whatever happens, you just take it,” she says. “Tokyo will not be the definition of who I am.”