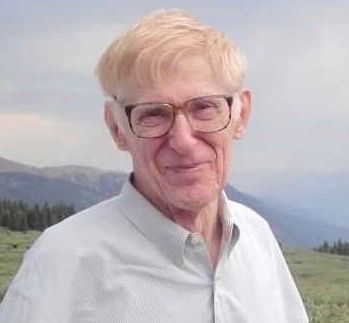 by Eleanor McNees, professor of English and Literary Arts

One of the Department of English and Literary Arts’s foundational professors, Gerald (Jerry) Chapman, passed away on June 30, 2020. Jerry was preceded by his one-time PhD student and colleague, Bob Richardson, also a former member of the department, just two weeks previous to his own passing. Although he retired from DU in 2003, Jerry maintained an active connection with his colleagues. He is gratefully remembered by a number of former graduate students, one of whom, Tamara Rombold Johannes, recalled the “favor” he performed for her:

"[Dr. Chapman] wrote a reference letter for entry to the Kew Gardens Public Record Office in 1987 when I went there to research recently declassified documents on postwar Eritrea for my husband’s dissertation research (I have always acted as his research assistant since he is blind). When I explained my purpose for wanting to see Dr. Chapman back then, everyone in the outer office insisted I couldn’t possibly ask Dr. Chapman for such a letter! But I needed one from my department chair, so I persevered. Dr. Chapman was completely gracious and wrote a beautiful letter extolling my training in working with such documents (which, if I may say, at the time I’d never worked with before!). The letter worked like a charm, though, providing me with a private reading room into which each day the librarians would bring whatever documents I’d ordered the day before. Upon my return to Denver, I stopped by Dr. Chapman’s office to thank him and express my surprise at how much help his letter had been. He said... they helped me because of my manner and professionalism in doing the research."

"He drifted in one day, took a seat — yes, sometimes he came into my office. And we were talking about legacies and what that meant. I said yes, I know, maybe something you do matters to a student. He shook his head. He took his hand, made a fist and bumped his own heart. Then he just walked out. I learned that you never asked Jerry what he meant by that.... I always read it this way:

"You get up every day and put your whole heart into whatever it is you are doing that day — teaching a class, writing something, going to a meeting, etc. Then you just let whatever chips fall where they may. We have no control over what others think of us. So we just do the absolute best we can and then... that is enough.

And Professor Emeritus and former Provost Bill Zaranka movingly stated, “When I was in my twenties, a child, Gerry dominated my imagination; and now, in my dotage, I feel like I'm saying goodbye to a colossal, kindly parent and friend.”

Hired to chair the department in 1962 after receiving his PhD from Harvard and teaching elsewhere for several years, Jerry managed to double the size of the department. Together with U.S. National Book Award Winner and DU professor John Williams, he founded the Denver Quarterly in 1966. During the ‘60s Jerry published several important books: Essays on Shakespeare (Princeton UP, 1965); Literary Criticism in England, 1660-1800 (Knopf, 1966) and Edmund Burke: The Practical Imagination (Harvard UP, 1967). Over the next three and a half decades he worked tirelessly as a dedicated teacher and generous colleague, purchasing (and actually reading) most of his colleagues’ books and articles and mentoring younger faculty as they joined the Department. In 1976 he received the Distinguished Teaching Award from the University of Denver. He was the primary Shakespearean in the Department and also taught courses in eighteenth-century British literature as well as a key course in the history of literary criticism from Plato to the present. His scholarship was wide and vast, and his lectures were minutely researched and conveyed his passionate devotion to each writer about whom he spoke. He delivered his retirement lecture — a model of modest erudition — to an appropriately large and appreciative audience in 2003.

As his two children, Professor of History at the University of Washington Robin Chapman Stacey and Professor of English at Illinois Wesleyan University Wes Chapman, write in their joint obituary for their father, he had a “profound and ultimately Shakespearean vision of human nature, with all its glories and limitations.” That Shakespearean vision allowed him a unique empathy for his colleagues and for the writers whom he most revered — Burke, Pope, Donne, Johnson. It also manifested itself in his Shakespearean appreciation for both humor and tragedy. When his grandson, a marine sergeant, was killed in Afghanistan in 2012, he faced the tragedy with dignity and fortitude and with deep concern for his grandson’s mother, his own daughter. In his last years, knowing that death was not far off, he was able to face its inevitability with courage and with an urge to commemorate his friends and family. Cogent and engaged till the end, he never tired of telling stories about his early days in the English department or asking his visitors about their own lives and stories.

Jerry graciously decided to donate the bulk of his large library to the department, which (together with Special Collections in the Library) will house his books and papers in the Gerald Chapman Memorial Collection. His spirit will pervade that collection as future students and faculty cull information and inspiration from the books they pluck from the shelves.