Sanctity At DU for its Muslim Students 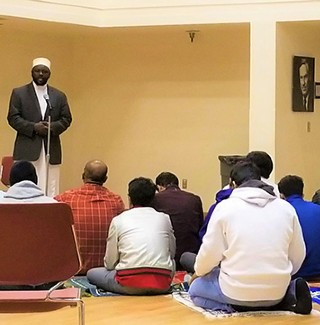 At the Jummah Prayer in the Driscoll Student Center on Friday, Nov. 3, 2017, Imam Shafi (Masjid Abu Bakr) said, "Terrorism knows no religion." The prayer, lasting just under an hour and co-sponsored by DU's Muslim Student Association (MSA or DUMSA), included a 30-minute lecture by Imam Shafi, wherein he talked briefly of the history of Islam, the prophets, the strive towards peace within Islamic devotionalism and Islam's foundational nature to the historical development of the United States. Yet despite the ease with which he conveyed pious practice, he spoke defensively regarding what is considered true Islam, which made apparent the prejudice, misconceptions and alienation that many American Muslims feel in the contemporary U.S.

Since Trump's election, the majority of U.S. Muslims view "Trump as unfriendly toward Muslim Americans," as shown by the Pew Research Center's study conducted from January 23 to May 2, 2017. According to various other studies and articles, a climate of discrimination has surfaced in regards to Muslim Americans, and specifically since Trump's election. Issues such as Trump's attempts at travel bans and his near-repeal of DACA undoubtedly contribute to three-quarters of U.S. Muslims' feelings that "there is 'a lot' of discrimination against Muslims in the U.S" and to 68 percent of U.S. Muslims' feelings of worry regarding Trump. Despite this, Imam Shafi, as well as other Muslim Americans, believe strongly in the sentiment: "we are not part of America, we are America."

How, then, do these issues affect a campus's internal "climate?" More specifically, is DU truly creating an "inclusively excellent" environment for its Muslim students, a student population who may be faced with religious or racial prejudice? Further, how much can a college campus really do when it comes to protecting its students?

In a letter to the editor of The Clarion, published January 17, 2016, it was stated that DU's administration received emails toward the end of 2015 regarding the campus's "racial climate": "one of the most recent on December 21st reassures the University's Muslim community that DU will strive to be inclusively excellent and encourage 'openness to new ideas, challenges to the status quo and compassion when discussing challenging topics.'"

According to Alia Reza, President of DU's Muslim Student Association, the DU administration still has a ways to go in creating a truly "inclusively excellent" environment. Throughout her life she has experienced various kinds of racism and prejudice: due to her "Latina appearance," she has been told on multiple occasions to "go back to Mexico," though her Arabic name put her on the no-fly list after the September 11th attacks. However, in her introduction to DU, she felt comfortable among her peers in the Humanities and Social Sciences: "when I first started, I thought, 'wow, this is great, people actually know what they're talking about.'"

Despite her comfort within certain areas of DU's campus, Reza's feelings of religious persecution are not entirely absent while at DU. "I really want to stress: this happens mostly online where, after something happens in the world, people...have felt like it's okay to go online and directly say things," she said. This has happened more frequently in recent years, and both she and the Muslim Student Association have experienced discrimination, she said.

She noted that after the Paris attacks, some people posted random quotes from the Qur'an on her Facebook page. Taking quotes about violence out of context, they attempted to prove to her that Islam is a violent religion. She had similar experiences after the recent Vegas attack. "That was an old, white man, but this still happens where people [went] on the MSA Facebook page" and left racist comments, she said.

While she says she feels a comfortability with other affinity groups on campus and has been invested in the MSA's efforts to create alliances, encourage education of Islam, and promote awareness around understanding issues such as DACA, she remains unshielded from racism and religious persecution. "They really do, on DU's campus," she says, "use online as a platform for those kinds of things. And it usually comes from students."

Other Muslim students at DU voiced similar distress, but they chose to remain anonymous due to fear of persecution.

While the social climate at DU appears to require more attention before Muslim students feel entirely accepted, the policies and infrastructure have already been improved significantly in just two years, according to Frank Tuitt, senior advisor to the Chancellor and Provost on Diversity and Inclusion. He referenced the Campus Climate Report that was published in 2015, which offered specific recommendations aimed at creating a truly welcoming and inclusive campus.

Specifically, Tuitt credited DU's implementation of policy recommendations and policy changes to Chancellor Chopp's leadership. After her arrival, the university reorganized diversity leadership, merging the Center for Multicultural Excellence with Campus Life to create the new division of campus Life and Inclusive Excellence. The university then created an Office of Diversity and Inclusion that would focus more attention on the faculty. "Now," Tuitt said, "we really support the academic units in their efforts to diversify."

According to Tuitt, the Faculty Senate partnered with the Office of Teaching and Learning at DU a few years ago in efforts to imbed diversity and IE into the curriculum, passing an initiative to "do everything in their power to create inclusive learning environments in the classroom," Tuitt said. This includes, among other policy and infrastructural changes, a Teaching and Learning series offered every third Thursday to provide faculty with opportunities to reflect on their pedagogical practices. 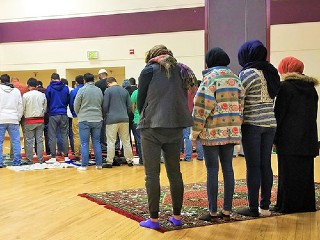 Additionally, since 2015 — according to Tuitt — the Office of Equal Opportunity and Biased Incidents Response Team has been more actively engaged on campus to allow students to report biased incidents when they do occur.

Other areas of campus have also addressed issues of inclusion. During Ramadan, DU's food service provider Sodexo began providing meals for Muslim students to break their fast before and after dining hall hours. But this happened largely as a result of pressure from the MSA. Sodexo was "extremely helpful and we couldn't have succeeded without them," said Reza. But "the MSA Eboard did the vast majority of work on this." The Eid-al-Adha Dinner, hosted by the MSA last year in celebration of one of the two main holidays in Islam, had a great turnout and was similarly supported by Sodexo.

But according to Reza and other Muslim students on campus, DU administration still falls short when it comes to providing the kinds of resources and policies necessary to provide justice for racist or prejudice actions. Reza said: "what's interesting about DU...[is that] people will report instances of racism and prejudice and say 'hey this happened,' and DU will say 'okay we're going to take this into account, we're going to do something about it,' and two months later nothing's been done. And it's like, I mean, you can be that person who would constantly follow up, constantly be in their face about it, but the problem is, you shouldn't have to be that person. Right? DU should just step up and do something; the climate's not going to change."

Reza did, however, express enthusiasm for the work of the Social Justice Solidarity group that is encouraging DU to adopt the label of "sanctuary campus." "Even if it doesn't change anything on an actual, level level, the fact that DU would be labeled as a sanctuary campus would promote the safety and sanctuary of our students by their race, religion, background," she said. She noted that she believed that students who were attacked would then feel that they would be protected. "We wouldn't constantly feel like we're about to be kicked out," she said. Such a sense of protection "would change the social atmosphere, and for that reason I definitely think we should do it," said Reza.

Tuitt, who is more reserved on the issue of the sanctuary campus label, agreed that students need and deserve a strong sense of security and community on campus. "My general sense is that we still have students that experience isolation, we still have students who are struggling to find authentic, culturally relevant and affirming experiences that validate their presence here," said Tuitt. "I'd like to believe there are less of those students than before, but the fact that some still remain means that our work is not done."