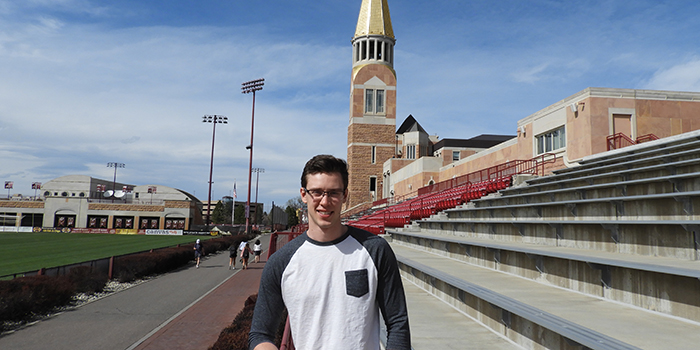 Editor's note: Leading up to commencement in June, we'll be featuring one student with a major or minor in CAHSS each week.

In an increasingly specialized world, Marcus Dockerty is a true Renaissance man.

As a double major in economics and political science who hopes to work at the Federal Reserve, he’s an economics junkie. But he could also tell you stories about culture and exploration from his time studying abroad in Paris—which comprised some of his most meaningful experiences at the University of Denver.

Yes, he’s an impressive researcher and an academic, having worked with one of his DU professors as a co-author on an economics paper that will be published this summer. But he could just as well talk about his affinity for jazz music, stand-up comedy, or Manchester City F.C. soccer.

Perhaps what best demonstrates Dockerty’s diverse interests is his extracurricular involvement on campus: alongside his nearly four years of work as an intramural sports referee and supervisor, he’s also a proud member of DU’s Finger Painting Club.

Originally from Arvada, Colorado, Dockerty will graduate with a strong foundation in economics after his experience doing high-level research at DU. He hopes to pursue a doctorate in development economics sometime in the coming years.

He’s also benefited in multifaceted ways from the wide-ranging opportunities he encountered at DU.

“DU has given me an excellent foundation, not only academically, but also professionally,” Dockerty said. “I have no doubt that the skills that I have learned as well as the networks I have created will continue to serve me long after I have graduated.”