On the Set of "Scary Lucy"

If someone had told me two years ago, when I first decided to study film, that my first filmmaking experience would be on the set of "Scary Lucy," I wouldn't have believed them. While I passionately wanted to work in the film industry, I didn't have a clue about what I specifically wanted to do or even where to start finding opportunities to work on film sets. 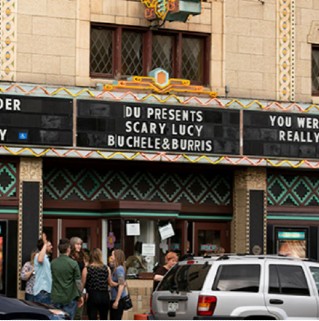 I attended an informational meeting about Project DU F.I.L.M., where it was announced that the script of "Scary Lucy" was ready for production. Project DU F.I.L.M. offers educational opportunities on a film set, and I learned that those involved would get a week of mentoring by industry professionals, including DU alumni. I submitted my application that day, expressing interest in the role of "boom operator," even though I wasn't sure I had what it would take to be anything other than a production assistant. Despite my doubts, applying for this role was hands down the best decision I could have made.

The first day, I arrived on set at approximately 5:45 a.m., just in time to watch a beautiful sunrise, begin unloading equipment and meet the mentors I would be closely working with for the next week. At the end of the first day, I was only beginning to grasp how great an impact this opportunity would have on me; I had been awestruck by the massive flags and powerful lights used by the gaffers, the incredible Arri camera and high end microphones. 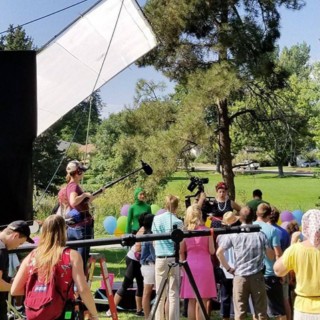 Through a whirlwind of questions, observation and hands on learning, I started to improve my skills as a boom operator and to expand my understanding of the filmmaking process. Under supervision, I was competent enough to wire talent with lavaliere microphones, mix and monitor levels on the field recorder, and manage the boom without (for example) getting in the way of the camera or dipping the microphone into frame. Other students I had only met once or twice previously came to mean more to me. I will forever cherish not only the experience of filming, but also telling jokes and ghost stories and finding creative solutions to problems with classmates and new-found friends.

On the seventh and final day of production, it felt surreal to be almost done. Even though I was exhausted and we were filming in the dead of night, those final few hours were a highlight of my experience on set. Everyone was working together, students and professionals alike. Even though I felt like a student on the first day, by the last day I was able to walk away feeling like a crew member. When the words "that's a wrap" were called out at 3:00 am, I felt empowered as a filmmaker and I knew that this was what I wanted to do. This was a pinnacle experience and the kick-off of my film career. 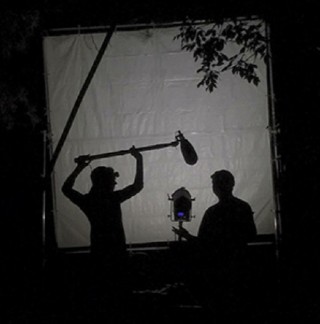 "Scary Lucy" transitioned into postproduction. Editors, colorists and other professionals put in more months of hard work to piece together a seamless final product. In May 2018, the cast, crew, friends, and general public gathered at Denver's Mayan Theater to watch the premiere. It is inconceivable how much this film taught me, and how far I have come as a filmmaker in such a short amount of time thanks to "Scary Lucy."

Since the premiere, "Scary Lucy" has gained attention from other audiences and film festivals for its comedic story of perseverance, inclusiveness and acceptance. To be able to watch the final product and reflect back on all of the wonderful memories from production, and to then reconnect with friends and mentors through various screenings, has been invaluable. Beyond my experiences and the lessons I learned on set, this film has taught me that there is a power in filmmaking and in being a storyteller.