"Star Wars": The Power of Franchise

During winter interterm, I found myself sitting in the Media, Film & Journalism Studies (MFJS) building for eight hours a day, five days in a row. Why? To immerse myself completely in the world of "Star Wars" and everything related to it in Professor Andrew Matranga's "Star Wars": The Power of Franchise course. I had seen most of the "Star Wars" movies and I considered myself pretty well-versed in the basics of "Star Wars," but the next 40 hours proved that in the grand scheme of things I knew almost nothing about the "Star Wars" universe. 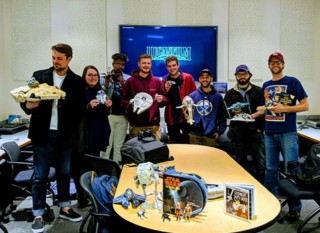 The class didn't just cover the films everyone knows about. It took us on a deep dive into everything associated with "Star Wars": George Lucas' life story and previous films, the inspiration for "Star Wars," rewrites of the script, how the actors were cast, the challenges encountered during production, the creation of the special effects used in the first film (Episode IV), budgetary and deadline issues, critical and popular reception, spin-off films, tv shows, animations and fan videos, products associated with the franchise (toys, games, clothing, etc.), and fan culture. There was so much more to know about the "Star Wars" franchise than I even knew existed, and we covered as much as humanly possible during the course. It often seemed like none of us could talk fast enough, and there was certainly enough material to fill several additional courses on the subject.

One of the highlights of the course for me was having the opportunity to do an in-depth exploration of any part of "Star Wars" that interested us for our daily blog posts. This gave me the chance to compare George Lucas' first film "American Graffiti" to "Rebel Without a Cause," another coming-of-age film that had been released 18 years prior. While watching "American Graffiti," I noticed the differences between the two films and was able to incorporate knowledge from a previous film history course.

During the course, I also had the chance to look into one of my personal favorite things about the movies: the capes. Under the guise of researching costume design, I got to read and discuss a number of articles that analyze the merits of the capes worn by characters throughout the franchise, and their rankings in comparison to other capes.

You may not have noticed in your previous viewings of "Star Wars" films, but capes are a popular accessory in outer space. Keep an eye out for Qi'ra's black and red cape in "Solo: A Star Wars Story," any cape ever worn by Lando Calrissian, the various iterations of Darth Vader's sweeping black cape, and Bail Organa's asymmetrical off-the-shoulder cape from Episode III. Trust me, once you start noticing the incredible capes, you'll never want to return to a cape-less galaxy.

By the middle of the week, "Princess Leia's Theme" and "The Imperial March" were on a near-permanent loop in my head. By the end of the week, almost every thought in my head was related to "Star Wars." For weeks afterwards I found myself bringing up random facts and anecdotes about "Star Wars" in most of my conversations. As I said, it was a full immersion into the "Star Wars" universe. I am sure I annoyed friends and family, and I know that I annoyed myself, but nevertheless it was one of the best classes I have taken at DU. If you have the chance, sign up for it.