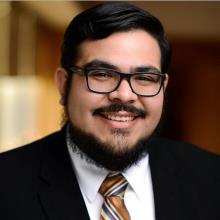 Jaime Guzmán has seen the effects of gentrification first-hand. The 4th year PhD student in communication studies is examining the impact of gentrification on lower-income communities of color, starting with his hometown of East Los Angeles, a Latinx and migrant community, predominantly of Mexican heritage.

Guzmán returned home this summer after receiving an AHSS Dissertation Fellowship to work on his dissertation. His research focuses on the Boyle Heights neighborhood and a counter-gentrification movement by a group called Defend Boyle Heights that has taken aggressive measures to stop gentrification.

"Defend Boyle Heights has gotten a lot of negative press by the Los Angeles Timesfor their militant action against white art galleries and coffee shops," said Guzmán. "They argue that the community does not need outside artists, mostly funded by Hollywood. They have sent all art galleries letters of evictions and have picketed outside a newly opened coffee shop that does not cater to the needs of the community they serve."

Guzmán's dissertation is titled, "The Whiteness Project of Gentrification: East LA's Gentefication, Anti-Gentrification Movements & the Eradication of Brown LA." Through his research he will show the complex way in which gentrification is introduced and implemented in Boyle Heights, the processes by which poor people of color fight back before they are displaced, and the ways a predominantly younger, college-educated Chicanx and Latinx population from East LA gravitates toward the movement of gentefication— investing in and returning to the old neighborhood.

The biggest motivation behind his work is to find a way for academics who study gentrification to work closer with people facing displacement.

"The dominant form of academic research examines gentrification as a neoliberal process that professes race neutral discourses of development and beautification of the urban landscape. When cities implement gentrification policies in their city limits, they document the blight that gentrification will address. Most of the time 'blight' is connected to communities of color which are, for the most part, also impoverished neighborhoods," said Guzmán.

"Rather than increase resources to these neighborhoods, gentrification merely pushes out people living in these neighborhoods and redevelops the region for an incoming white population," he added. "In this project I argue that gentrification needs to be examined not solely for its neoliberal processes, but also for its direct, and related, relationship to the continued displacement and erasure of poor people of color from the city."

Guzmán admits that gentrification is more complex than he originally thought, as residents often appreciate the fortified roads and bridges, increased police presence, and improved local economy that it creates.

"Hopefully through this endeavor I can show that focusing on a gentrifying community is a fruitful endeavor not only to further understand this process but also as a critical point for academics to merge their work with community organizations that fight and push back gentrification initiatives," he said.

Guzmán received both a BA and an MA in communication studies from California State University, Los Angeles. Although he was drawn to the study of rhetoric, his interests lean toward race and racism. He chose the communication studies program at DU because it allows him to take classes from different disciplines and incorporate the theoretical paradigms into his research.

"It is because of this that my dissertation takes from communication studies, critical race studies, critical feminist geography studies, urban studies and whiteness studies," he said. Classes and conversations with his advisor Dr. Armond Towns, have helped him to make interdisciplinary connections to his dissertation project. "My scholarship has transformed so much because of his mentorship."

Following completion of the PhD program, Guzmán hopes to get a job near a community that serves an underrepresented population. He wants to work closely with the community to ensure that students who want to pursue a higher education are able to succeed. And, he will continue the work that he started for his dissertation.

"I am from East LA. I was born and raised here and I wish to continue to live here," he said. "However, I do realize that if gentrification worsens in this neighborhood I will have to embody the politics I write about and move out of East LA while continuing to fight against gentrification."