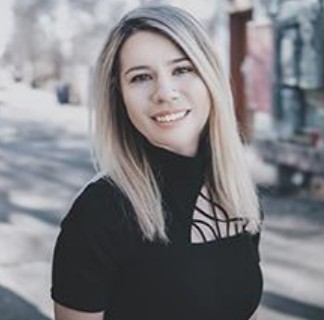 As children, we all thought of ourselves as adventurous detectives, those who find the right clues, the missing puzzle pieces, to solve the mystery and save the day. Nina Petrovic is no exception. A fourth-year journalism major, Petrovic's fondness for writing began as an adolescent.

"When I was a kid, I really liked mystery stories, like Nancy Drew," Petrovic said. "I was always interested in finding out things, solving things, researching things."

In 2016, Petrovic took a gap year to live in China, where she was able to to find a position in a broadcasting school.

"I just recorded audios for them," she said, "but they took me on a tour around campus and I thought it was really cool to see all these people working on different stories with different equipment. And I decided I wanted to do that. So when I came back to the states, I officially switched my major to journalism."

After taking several journalism courses and becoming a writer for DU's student newspaper, The Clarion, Petrovic embarked on her next great adventure: Working for Westword, a free digital and print media publication based in Denver.

"I'm their editorial intern," Petrovic explained. She came across the opportunity in winter quarter 2019 when one of her journalism professors, Andrew Matranga, invited the Cannabis editor from Westword to class as a guest speaker.

Petrovic said, "The editor mentioned like, 'If you write freelance for us, we'll pay you $50 an article.' A month later, I reached out to him and said 'I'm really interested in starting to write for you guys' and he started sending me pitches so I started off as a freelance for a few months."

Later, when Petrovic was looking for internships, she met with the Cannabis editor over coffee to discuss her editorial journey so far. Due to her stellar work, the editor was delighted to talk to the editor in chief and offer her the editorial intern position at Westword in August of 2019.

Petrovic writes cannabis journalism, a topic with negative connotations for some. "When I got into it, I thought it was going to be about a bunch of potheads who smoke weed in their basement but there's a lot that goes into it," she said. In addition to concerns with law and culture, Petrovic noted, "There's cannabis fashion and a lot of things related to the environment like how does cannabis contribute to climate change and wasting energy. So it really does contribute to other sections as well. The more I write about it, the more I learn about it."

Cannabis isn't the only thing Petrovic's learning about on the job. Her experiences with Westword have taught her professional skills such as writing with an active voice, learning how to address people and figuring out how to get what you want. Petrovic said, "I've learned to become very annoying. So if people aren't responding to me, I'm always sending follow-ups or setting deadlines. It's like if they don't respond, what's your next step? There's a lot of thinking on your feet."

In addition to her journalism major, Petrovic is also a religious studies major. Of the major, she said, "You learn about different cultures and looking at history through religion and the psychology of religion. You learn how to respect other's people's cultures, especially when you're talking to someone who's different than you."

The ability to respect and connect with people on a cultural and religious level has also helped Petrovic develop her philosophy and ethics as a journalist. Acknowledging and discussing diversity is extremely important to her: "Today, a lot of people are stuck in their own mentality and it's a very polarizing thing. You don't know how to express different thoughts and religious studies teaches you how to do that. Like how do I as an atheist talk to someone who's Jewish or how do I, as someone who really doesn't smoke cannabis, talk to someone who smokes it every day? It's about being able to express your ideas in a civil and calm way."

After graduation, Petrovic hopes to travel the world and freelance where she can. When asked if there's a specific aspect of journalism she wants to focus on, she hesitated. "I would love to stick to writing for news," she said, "but I never thought I would write in cannabis either. So I try to keep my options open and I don't want to narrow myself down to one thing."

Petrovic urges fellow journalism students to start networking as soon as they can. "That's one way you'll be able to get jobs or to get people for interviews," she said. "You have to start making your name known and have business cards so you can hand out to people."

Petrovic recently wrote a cover story for Westword's Cannabis section, which discusses cannabis-related courses at DU. Her journalism journey had difficult climbs, but in the end, it was worth it. "I just expect the unexpected, that's my life motto," she said.

You can read her most recent articles on the Westword website.