Under the Asphalt, Denver's Hidden History 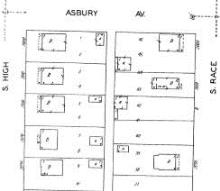 As Denver continues to grow, parking lots have been vanishing across the city. While most are concerned about the buildings being erected in place of their former parking spots, the University of Denver's department of anthropology is more interested in what has been entombed beneath layers and layers of asphalt.

Taking advantage of the University's plan to expand under a new Campus Master Plan, the anthropology department launched the University of Denver Campus Archaeology Project on January 1, 2018.

Before a parking lot disappears and new dormitory construction begins in June, Professors Larry Conyers and Bonnie Clark, will lead a team of anthropology graduate and undergraduate students, alumni, and community members on a months-long investigation of the site, located west of Sturm Hall. The project will use historical records, ground-penetrating radar (GPR) technology, and archaeological excavation to uncover the history of the neighborhood before it became a part of the DU campus.

"Archaeology can shed light on the human experience of every era, even those seemingly well-documented historically," said Clark. "By investigating the remains of early 20th century housing we hope to reveal the strategies of Denver residents as they responded to processes of urbanization and changing technology."

The first step will be to collect as much information about the area as possible. Jasmine Saxon, a graduate research assistant, will use computer mapping, property records, and old maps of the area to reconstruct what the neighborhood looked like in the 1920s.

Conyers will guide a team of students using GPR—high-frequency radar pulses—to create images of what's buried underneath the parking lot. His students will then use the subsurface maps in comparison with the historical map of the neighborhood to decide what should be excavated and why.

With a clear picture of where to dig, Clark's Archaeological Field Methods class will begin excavating the site during spring quarter 2018. The greater Denver community, especially neighbors of the University, will be invited to participate in the dig and to learn about the history of the neighborhood.

In addition to leading the dig, Clark's students will also have the opportunity to complete archaeological documentation of a number of small bungalows along High Street also slated for demolition. Students will learn valuable skills in the field while also contributing to the Discover Denver Project, documenting Denver's historic buildings.

From the data already collected and a small GPR survey conducted in October 2017, the team knows that there were multiple houses on the site and a cellar remains buried under the pavement. Through research, excavation, and community engagement, the team hopes to discover who owned and lived in the houses and how the neighborhood has changed over the last 100 years.

As the University continues to expand, DU's Campus Archaeology Project will continue to use prospective construction sites as a tool for community-engaged teaching and learning. For more information about these projects, visit www.du.edu/ahss/anthropology.