What's in a Name? Passion for Learning Paves Path for Aristotle Johns 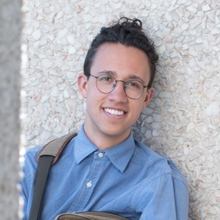 "I just got my first smart phone a couple of months ago," says University of Denver senior Aristotle Johns. "It's way too much for me."

It's hard to imagine that anything could be too much for a student who answers to Aristotle, whose smarts have earned him honors distinctions in both his majors and who will graduate in June with degrees in two demanding disciplines: creative writing and history.

Foiled by a smart phone? Not likely. Too busy to master an app? That's more like it.

Ever since he landed on the DU campus in fall 2014, Johns has whirled through DU's academic and extracurricular offerings, determined to soak up as much intellectual stimulus as a 24-hour day will permit.

Over the course of his time at DU, he has studied abroad in Bilbao, Spain; performed in Department of Theatre productions; sampled classes all throughout the arts, humanities and social sciences; pursued study and service opportunities through the Pioneer Leadership Program; and utilized a Partners in Scholarship grant (created to fund undergraduate research and creative work) to spend three wintery weeks on the Massachusetts coast "reading, writing and meeting these kind of kooky small town people that I fell in love with."

The writing in question involved his three-part novel, which he began pondering during his time in Spain's Basque country. The first part of his magnum opus serves as the honors thesis for his creative writing major. "It's upwards of 200 pages, and that's a little bit long for [his professors] to read." Hence the partial submission, he says, noting, "The novel is something I plan to work on for the next few years of my life."

While cranking out hundreds of pages of fiction, Johns also took on an ambitious thesis for his history major, working closely with associate professor William Philpott on a topic that allowed him to ponder attitudes and perceptions, as well as events.

"It's about the historical narratives that Americans crafted concerning the atomic bomb — and the ways in which Americans have spoken about the atomic bomb and why that frees America from certain levels of guilt and responsibility and compassion. It has to do with dominant narratives of American history and how those were constructed and entrenched in the American consciousness," he explains, adding that his focus on how Americans remember the atomic bomb complements some of the themes in his novel.

"Memory as an abstract concept is something that really, really interests me. And if someone were to ask me what one of the main themes of my novel is, I'm also trying to grapple with the fragility of memory," he says.

Johns grew up in Genesee, Colo., and graduated from Lakewood High School's IB program. An Eagle Scout, a film buff and an avid lover of the outdoors, he came to DU based on the strength of its creative writing program, history department and library — not to mention a strong recommendation from his older brother, Constantine, who graduated in 2015.

Once on campus, Johns found himself in a position that has characterized every academic experience in his life. He has always been, as he puts it, "the only living Aristotle" in the classroom.

"I can't take credit for it," he says of his name. "It came from the two most perfect people I know and those are my parents.

"In the Greek tradition, what happens is that the oldest son is named after the father's father. The second son, if there is one, is named after the mother's father. Both of my grandfathers are named Constantine. So my older brother is named Constantine. Kindly, my parents didn't want to name me Constantine as well. They are very much believers in giving their children a name that immediately encourages them to live by a higher standard and regard themselves as an individual."

Johns' eagerness to pursue a higher standard plays well in the classroom. Brian Kiteley, the creative writing professor who has worked with Johns on his novel, notes that Johns is a "voracious reader and re-reader. I've noticed he follows up on suggestions, reading well beyond whatever I or a classmate talk about. Aristotle refers his classmates to other writers and stories that seem related to the student work. He also asks really good questions, and he wants to know how a story was made."

After he collects his diploma at Commencement ceremonies in June, Johns plans to take time off to reflect on his education so far, explore some creative opportunities with friends and begin plotting a course to graduate school. Not surprisingly, given his love for reading and rereading (at least 50 books a year), his passion for writing and his appetite for polymathic studies, he envisions a life in higher education, teaching and mentoring — much as he has been taught and mentored.

"I don't ever want to stop learning," he says, "and if there's an environment where that continues, that makes me overjoyed."