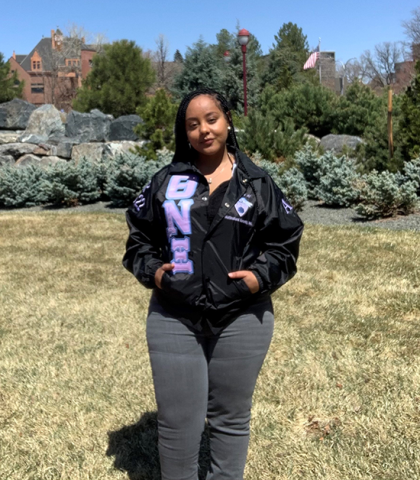 Riding the light rail past the University of Denver on her way to classes at the Community College of Denver, Ruth Petros often wondered what it would be like to attend DU. She didn’t know much about the University, but she was intrigued by the campus, the buildings and the students she saw bustling around.

Originally from Ethiopia, Petros immigrated to Denver seven years ago with her family. She is the first in her family to go to college and graduated from CCD in 2020 with an associate degree in political science. That experience opened her eyes to a world of possibilities.

“Community college actually changed every perception that I have about college,” including where to go and what to study, she says.

Petros applied to DU to continue studying political science and was thrilled to have been accepted to the university she had admired from the H train. She was looking forward to a full campus experience, but her classes, like many others, had moved online during the pandemic.

“I couldn't see anything at the University, so I had to wait [almost] a year to go back,” she says. She began attending classes on campus last fall and has since enjoyed making new connections.

“Being on campus is more fun because I get to connect with a lot of people and a lot of organizations,” says Petros, who has joined the multicultural sorority Theta Nu Xi and Divest DU. She also is a member of the College of Arts, Humanities and Social Sciences First-Generation College Student Program which supports liberal arts students who are the first in their families to attend college.

“That was actually the first group that I joined since the campus opened,” says Petros. Her advisor recommended it to her. “I feel like it’s a privilege to be in this group because I’m literally taking a lot of information from this group, especially career advising and mentorship.”

Students in the program can discuss their concerns or challenges as first-generation college students while gaining support, direction and connectivity from a team of mentors.

“One of the primary challenges for first-gen students is that they don't have a community at home that understands their academic journey, and that is probably their biggest challenge,” says Rhonda M. Gonzales, dean of the College of Arts, Humanities and Social Sciences.

“By and large, families want them to get an education, but they don't have anyone at home who has had that experience and can guide them,” she says.

“We understand nationwide, students generally, but first-gen students in particular, often don't have the best first quarter or semester of college academically, and then get discouraged, and then self-select to leave,” says Gonzales. Students who don’t have someone at home to tell them they’ll be okay can benefit by being part of a supportive community like the first-generation program, she adds.

Petros agrees that it can be difficult being the first in the family to attend college. “You are the token of your family, so that your siblings can follow, and it's not actually a question to go to college in my family,” she says.

Since her parents didn’t have a college experience, they don’t always understand the work and time commitment that is required, she says.

“I believe that they're changing, they’re learning from me. I believe that when I learn they learn as well, so I think it's a win-win situation.”

Petros will graduate in June with a BA in political science and a minor in international studies. She has been talking to Google about a possible internship as an entry-level market research analyst. This would give her experience working with graphs and marketing, two areas that interest her. In the long term, she sees her future in international law and hopes to attend law school or grad school for international studies.

“I want to take that education into the work field, actually working with UNICEF or Amnesty International that promotes safe environments for women and children all over the world,” she says.