The Holocaust Awareness Institute is dedicated to furthering education about the Holocaust and its significance for current and future generations. Our public programs present new scholarship and perspectives on the Holocaust, commemorate the countless lives lost, and pay tribute to the stories of those who survived.

HAI also works to inform our community about other local events that relate to Holocaust awareness and education. Our calendar of events includes important dates that are commemorated throughout the year.

The Marcus Lecture was created in 2003 in memory of Fred Marcus, a Jewish educator who was born in Berlin and spent the war years in Shanghai as a refugee from Nazi Germany. Fred served as a member of the Speakers Bureau of the Holocaust Awareness Institute for many years, educating students and members of churches and synagogues about the Holocaust.

Presented in partnership with the Mizel Arts and Culture Center's annual JAAMM Festival, the Marcus Lecture highlights new scholarship and perspectives on the Holocaust and illuminates its continuing significance today. The lecture is offered in the fall to provide educational programming to the community around the anniversary of Kristallnacht (November 9–10, 1938).

The Holocaust Memorial Social Action Site (HMSAS) is a space dedicated to inclusivity and diversity through learning, intercultural dialogue and social justice initiatives. The mission of the site is to honor and remember those who lost their lives in the Holocaust by dedicating ourselves to acts of learning, dialogue and bridge-building aimed at making the world a better place today and into the future.

Our vision is linked to the Hebrew expression, "Hineni": "Here I am," a post-Holocaust ethical teaching about the infinite responsibility that each one of us has for the other. In post-Holocaust Jewish philosophy, this expression conveys a strong message; the words "Here I am" are words of ethical response—they mark the infinite responsibility that each of us has to the person standing before us. In this spirit, the site calls us to action, while emphasizing learning and dialogue. 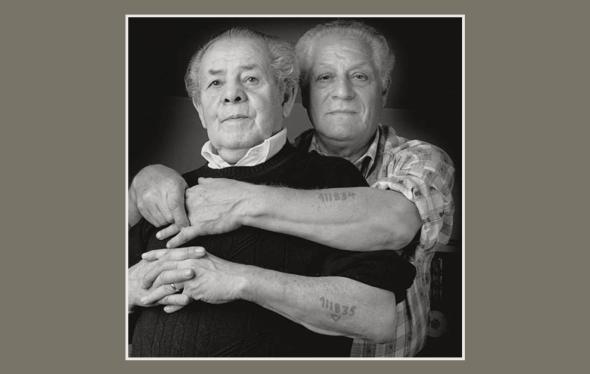 In commemoration of Yom HaShoah, Holocaust Remembrance Day, the Holocaust Awareness Institute presents an exhibition of portraits from The Triumphant Spirit: Portraits & Stories of Holocaust Survivors by Denver photographer Nick Del Calzo, on loan from the collection of Michael Feiner.

The Triumphant Spirit presents the stories of witnesses to one of the darkest chapters in human history. Each story tells of tragedy and suffering, but also of determination, devotion and survival.