Faculty in Emergent Digital Practices are artists, educators and theorists who create projects that explore art's intersections with science, politics, religion, sound, and much more. Our faculty exhibit their work internationally at venues including Ars Electronica, FILE, Transmediale, the San Francisco Museum of Modern Art, the Andy Warhol Museum and the KTH/Swedish Royal Institute of Technology, among others.

"I hope to bridge a dialogue between art and science as an instance of emergent sensibilities into the endangered ecological memory of our imperiled planet. Every day we are on an ecological wander and a lifelong collective pilgrimage to encode ecological memory. This pilgrimage gives us the time and space to remember that we are the biosphere with the responsibility to preserve the environs around us." 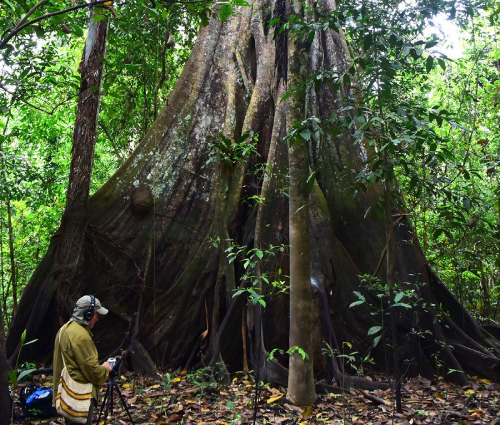 Trace Reddell is a professor in the EDP program and, in 2018, published his book "The Sound of Things to Come," which incorporates multiple theoretical approaches to explore the impact of sonic arts on film and culture. Reddell explores the important roles that music and sound design play in science fiction filmmaking, in American as well as international films and ranging from Hollywood blockbusters and B-movies to art films, indie cinema and planetarium shows.

In 2018, professor Laleh Mehran created a site-specific interactive installation for The Mattress Factory in Pittsburgh, PA, an acclaimed art installation museum. Mehran's installation, titled "The Interstitium," featured Boorosh (ancient Persian for glimmers of light) emerging from coal and becoming light and narrative, extending the search for meaning into the infinite.

Rafael Fajardo, an associate professor in EDP, is developing a video game project called "Juan & the Beanstalk," which allows players to explore the tensions the character, Juan, experiences in a fictionalized Colombia. This is just one of the projects Fajardo has created member and founding director of SWEAT, a collaborative that produces socially conscious video games.

Learn More About Our Faculty