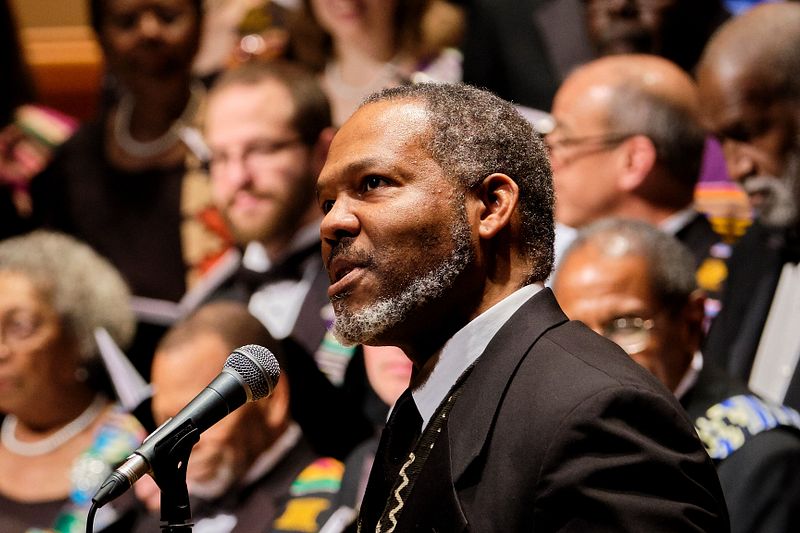 What musical experience captures each of us to the point where no career path is for us other than music? For Roger Holland, Teaching Associate Professor and Director of The Spirituals Project, it is the choral experience. Beginning as a member of the Boys’ Choir of Harlem and continuing to this day as the conductor of The Spirituals Project Choir, Holland has been drawn to the special work as well as the warmth and familial character of  choirs – from singing in them, conducting them, composing for them, and writing choral arrangements.

Holland’s love of choral music began through rich and diverse experiences with the Boys’ Choir of Harlem. The choir performed a combination of traditional works (Bach cantatas, the Mozart Requiem, etc.) to concert spirituals and Black popular literature. It sang at such places as Lincoln Center and the White House, and it toured nationally and internationally. Through the choir, Holland says, “a wide world of music had been opened up to me that I never knew existed.” He also started his lifelong work arranging compositions for choir.

Holland completed a degree in music education from Westminster Choir College, majoring in piano and voice and singing in choirs that performed with the New York Philharmonic under the batons of Leonard Bernstein, Ricardo Muti, and Kurt Masur. Graduate studies in piano followed at Manhattan School of Music and a Master of Divinity from Union Theological Seminary. He became the Artist-in-Residence and director of the Union Gospel Choir, a position he held for over 13 years. The seminary recognized him in 2015 with its Trailblazers Distinguished Alumni Award for his contributions to the legacy of African American music.

In 2016 Holland came to Lamont, appointed as the Director of The Spirituals Project (TSP), an organization “dedicated to preserving and revitalizing spirituals, through musical, educational, and social justice work in our community.” His work has elevated the quality, size, and renown of TSP’s choir. Of the ensemble, Holland notes that “some come because they love Black music, or believe in [the choir’s] mission, or are drawn toward a choral ensemble…seeking community through a choral connection.” He does not mention that many members are there because of him. His work directing TSP is inspiring.

The choir’s popular concerts on campus and in the greater Denver area, the community sings and symposia he has organized, and his curation of Journey to Freedom: The Spirituals Radio Project on Colorado Public Radio all speak to Holland’s leadership of TSP, which explores spirituals purposefully by putting them into historical and cultural contexts, going beyond their performance solely as part of the choral repertoire. His hope is to make DU a repository for spirituals – an archival source, an institute/research facility to study them, a destination for all things related to them.

From an early age, music’s spiritual (as in sacred) connection has been a part of Holland. He now is expanding that work through completing a Doctor of Pastoral Music at Southern Methodist University, where he is focusing on Black Catholic music, an understudied topic for which he is developing national recognition. He also serves as editor of the Black Catholic music collection as well as arranger and composer for Chicago-based GIA Publications.

In any conversation with Holland, one leaves with a sense of how deeply he loves and is committed to his work as a conductor, teacher, performer, scholar, editor, and mentor. He teaches a variety of courses that explore music, spirituality, and race. He speaks with passion as a performer about all styles of music, and he asks questions that reveal his intellectual engagement with music.

When I asked Holland to look into the future, he said he wants to have an impact on the world of music, challenging himself by asking, thoughtfully, what he is going to contribute to our field. Considering his significant impact these past six years at Lamont, I would say he is on the way!