For Alumna Jill Pommrehn Krug (BA ’94), the University of Denver feels more like a second home than an alma mater. Her father served as Registrar from 1970-1999 and she was both a spectator and participant in numerous campus events, even helping stack diploma cases and handing them out on graduation day. 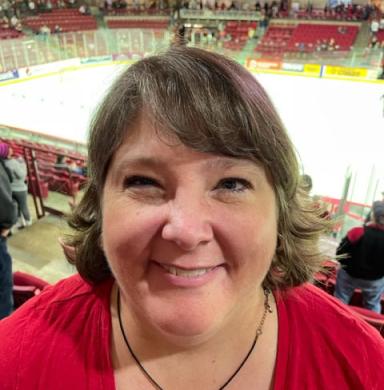 “Growing up my life was basically DU,” she said. “We went to hockey, basketball, gymnastics, volleyball — all the sports events.”

Also a lifelong Girl Scout, Pommrehn Krug and a group of fellow Denver Scouts traveled to Russia in 1990 on the cusp of the collapse of the Soviet Union with the goal of restarting the Scouting movement there.

“We visited Moscow, Minsk and Leningrad, camped and sang songs and did all the normal Scouting activities,” she said

The following summer, the Minsk-based Scout group visited Denver and reveled in Colorado adventures including white water rafting and a trip to Mesa Verde National Park. The exchange ignited a passion for Russian language and culture and fostered lasting international connections for Pommrehn Krug,

Nearly 30 years since graduation, she continues to relish forging relationships across borders and giving back to her home away from home.

Pursuing Degrees in All Things Russian

Pommrehn Krug started at DU in September 1990 as a mass communications major and continued studying Russian — later declaring the latter as a second major. She studied Russian her junior year, spent six weeks in St. Petersburg “and became fascinated with all things Russian.”

She credits DU Professor Luc Beaudoin with inspiring her to pursue a graduate degree in Russian Literature.

After graduating in June 1994, Pommrehn Krug moved to Minsk to teach English and study history at Belarus State University before returning to DU to work at the Daniels College of Business.

She went on to earn a master’s degree in Russian Literature from the University of North Carolina, but realized she was not cut out to teach the subject.

“You have to follow the right steps and procedures which appeals to the perfectionist side of me,” she said. “But there’s also the gray area of the law — if it doesn’t say you can’t do it, then you can. The work appeals to both sides of my brain.”

While that has improved, Congressional gridlock remains, preventing long overdue, meaningful immigration reform on issues like number of visas issued, number of citizens per country per green card per year needed to make the U.S. more immigrant- and business-friendly.

“Americans coming out of colleges now are not going into computer science and don’t have the skills that companies like mine need. We have to hire international citizens,” Pommrehn Krug said.

Pommrehn Krug has shared her expertise with students like Dhruvi Thakker, an international psychology student from India, “who wants to work for a U.N. entity and make the world a better place.”

Pommrehn Krug put Thakker in touch with Irina Bonch-Osmolovskaia Norstrom, one of the Minsk Scout leaders she’d met years earlier who works for the U.N, and she shared some internship ideas.

Pommrehn Krug, who met her now-husband in the dorms her first day at DU and whose 15-year-old son learned to play hockey at DU and 13-year-old daughter has taken DU gymnastics classes since she was little, is also jumping in to help DU Gymnastics Coach Melissa Kutcher-Rhinehart.

“One of Melissa’s freshman students wants to study, live and work abroad,” Pommrehn Krug said. “Melissa and I are getting together to help her figure it out.”

“I firmly believe that travel is the window to your own soul,” Pommrehn Krug said. “You learn, grow and become a different person when you travel and learn new perspectives. Before all my trips abroad, I would never have thought about a career working in immigration much less with international students and workers. Now I can’t imagine a different life.”