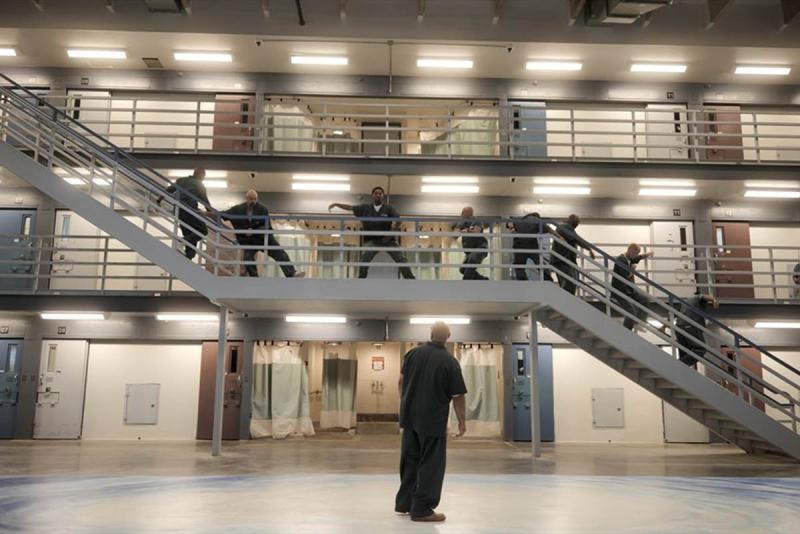 During the middle of the day, the lights in living unit 4 of Sterling Correctional Facility, a men’s maximum-security prison in Sterling, Colorado, begin to dim – a perfect stage for an imperfect system.

A door slides open, and a man, known as The Interviewer, dressed in street clothes, walks through the audience. As noises begin to fill the space, his clothes are stripped away. He’s left with only prison attire, while another man steps onto the stage.

The Executive Director of the Colorado Department of Corrections, played by an incarcerated man, delivers his opening monologue.

“If Light Closed Its Eyes,” is the product of over 50 incarcerated artists at Sterling Correctional Facility.

With the help of Ashley Hamilton, executive director of the DU Prison Arts Initiative and assistant professor in the Department of Theatre, they produced an interview-based play.

“What story do we want to tell?” Hamilton asked.

They mulled over a variety of themes, but ultimately, they decided to focus on shared humanity and the criminal justice system.

In early 2020, they set out to conduct 25 interviews. But when COVID hit, the group dove deeper into the project.

For an entire year, they met virtually. Hamilton recruited her mentor, Joe Salvatore, who directs NYU’s Steinhardt Verbatim Performance Lab, to train the men in proper interview protocol. And in the summer of 2020, they conducted their first interview.

Over the next year, they interviewed 100 people, of which 40 were incarcerated. They also interviewed victims, Department of Corrections staff, politicians, families of incarcerated people and spiritual leaders.

“We tried to set out and understand the 360-degree view of the criminal justice system. They really changed us, the interview team and me,” Hamilton said.

They transcribed 100 interviews verbatim, writing down every “um,” every pause and every stumble. Then came the hard part. They poured themselves into the transcripts to find stories that rose to the surface, focusing on 17 characters across the system. And in July 2022, the team was ready for showtime.

“It ended up having a huge movement component, dance. [The play] happened all over the cell house. The audience walked through the prison and in the yard,” Hamilton said.

This isn’t the first time Hamilton’s directed a play at Sterling Correctional Facility. In 2019, she directed “One Flew Over the Cuckoo’s Nest". But “If Light Closed Its Eyes” attracted new artists and actors, captivated by the human component of the project.

“People’s stories never cease to amaze you. The resiliency of humans is incredible, and there’s such a deep desire to be seen. There’s so much misunderstanding because we don’t stop to see each other.”

That desire permeates every line in the play. At close of the show, the ensemble members gather, and like a broken record, they repeat their lines. A cell door slams shut, the recorder clicks once more and the lights fade to black.