Josué Rodríguez grew up in Denver. To him, the University of Denver was the bridge over East Evans Avenue. When he began thinking about college, he considered a variety of universities in Colorado, but landed on DU. 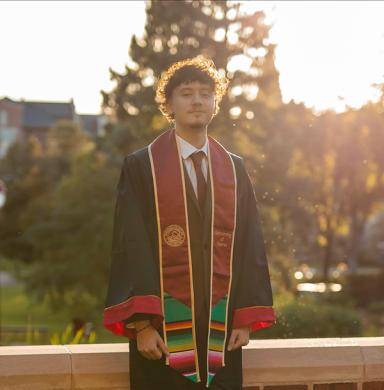 “I knew I wanted to eventually go to law school and I just thought that DU would put me in the best position to be close to family but also get the best education,” Rodríguez said.

He will soon graduate with a BA in political science, a BA in international studies and a minor in critical race and ethnic studies (CRES). As it turns out, his initial impression of DU wasn’t far off.

“These four years have really changed me for the better and have helped me develop professional skills that I didn't have coming into school,” Rodríguez said.

One area where he developed skills was in his writing. Another was building confidence.

Along with building skills, Rodríguez has been building a network. Through his on-campus job at the Cultural Center, he found support from Jasmine Pulce and Neda Kikhia, who provided a safe place to hang out.

In his critical race and ethnic studies classes, former MFJS Professor Johnny Ramirez and Religious Studies Professor Jason Jeffries provided mentorship. Rodríguez enjoyed his CRES classes so much that he took more than the five required to get a minor.

He also appreciated the opportunity to do service learning through his CRES classes.

“The most memorable service learning I did was with Professor Lisa Martinez and Casa de Paz,” Rodríguez said. “The class was about immigration, so we partnered with an organization that helps those affected by ICE immigration detention.”

He is focused on serving the community in his current role with the Montbello Organizing Committee. While Montbello is one of Denver’s largest neighborhoods, organizers say there’s a significant underinvestment of resources.

“The Montbello Organizing Committee is a nonprofit that serves Montebello and most of the far northeast of Denver, focusing on equity within the neighborhood,” Rodríguez said. Currently they’re working on an affordable housing project, building an arts center, and more.

Rodríguez said his experience there has reiterated his desire to do work that serves the community. It has also affirmed his childhood dream of going to law school. He has seen first-hand the need for lawyers in community work. He plans to apply to law schools, including DU’s Sturm College of Law, over the next year.

“I learned a lot and I hopefully will be back in a few years for law school,” Rodríguez said. “I'm pretty grateful to be where I am right now.”