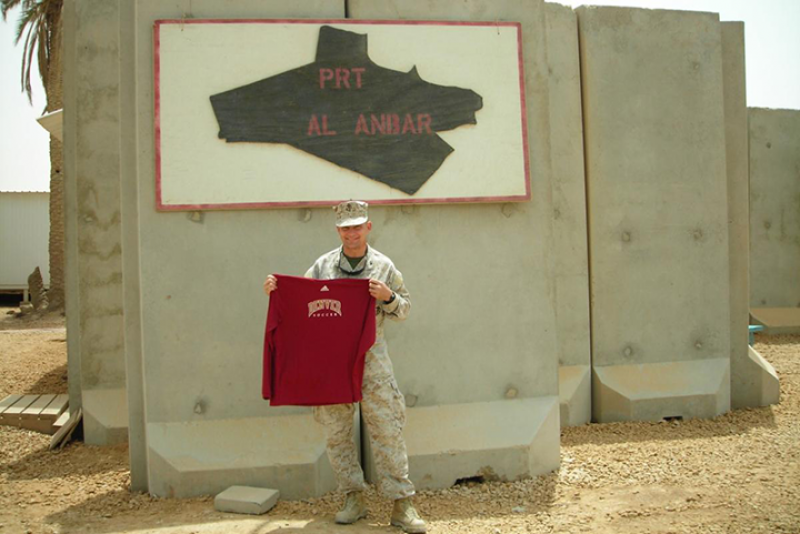 Brett Barkey’s relationship with the University of Denver began 42 years ago when he came to DU for his undergraduate degree in economics and history. Since then, he has served in the U.S. Marine Corps, worked for the U.S. Treasury Department and gotten his law degree. Now, Barkey will graduate in the spring with his master’s in economics after returning to DU in 2019.

As a Colorado native, Barkey attended high school in the Denver area where he was a passionate trumpet and soccer player. At the time, he was taking trumpet lessons from a professor at DU who ended up introducing Barkey to the soccer coach at the University.

“Between soccer, music and an honors scholarship, I was able to come to DU on pretty much a full scholarship. I was a four-year starter on the soccer team and was in the music program for a year until I switched over to economics in 1980,” Barkey says.

After graduating in 1983, Barkey went to Georgetown for law school and then later had the opportunity to join the Marine Corps, serving on active duty for 10 years. It was from there that he got to work in the U.S. Treasury Department for eight years before returning to the Marine Corps after 9/11, serving three tours in Iraq. He then became a state prosecutor for eight years in the mountains in Colorado. Even through the several positions Barkey has held, he never lost his interest in economics.

“After I retired from all of that, I decided to come back and be a student again to learn more about economics. When I was an undergrad major in economics, we did not have to have a mathematical background at all, but now that’s such a central part to economic thinking. After all that time, I realized I definitely needed to update my understanding,” Barkey says.

Not only did Barkey feel like he had to update his economic knowledge, but he came back to DU to simply pursue his love of learning. With a strong curiosity and desire to learn more, Barkey has appreciated the way DU has challenged him to do just that.

“The faculty in the economics department is devoted to really teaching the subject well. They are committed to introducing people to the field in a critical and open-minded way; they don’t just accept one approach but expect you to think critically about all of the different approaches,” Barkey says. “There was so much more for me to learn in economics in order to achieve the understanding that I hope to achieve in the field, and I knew I wanted to come back to DU for that.”

After spending three decades in public service, Barkey has learned that there are several ways to continue this work. He plans to get his PhD so that he can work in rural economic development.

DU has not only served as a foundation for Barkey to pursue his economic passions but has given him support through the Student Veterans Association. Whether guiding him through the bureaucratic maze of the Veterans Administration and accessing the GI Bill or in helping him transition back to a quarter system, they provided Barkey with the support that he is very grateful for.

“I was blessed with financial support all the way through university, and I don’t know if I could’ve gotten through without that. I credit DU with starting me off really well and it was just a wonderful opportunity to come back and to have that support,” Barkey says.

Barkey has no intention to stop learning anytime soon. DU served as his foundation to the world of economics and has welcomed him back and given him a place to expand on that knowledge decades later.

“It’s been all of that and more for me just because it’s required me to learn more, challenge what I thought I knew when I came, revisit all of my old prejudices and biases and think about things in a new and critical way. It’s been a terrific intellectual exercise. That’s what I think a university should do and DU has certainly done that for me,” Barkey says.

Plans for commencement for the Class of 2021 are underway. We are extremely proud of our 2021 graduates and are looking forward to providing commencement information as soon as possible.