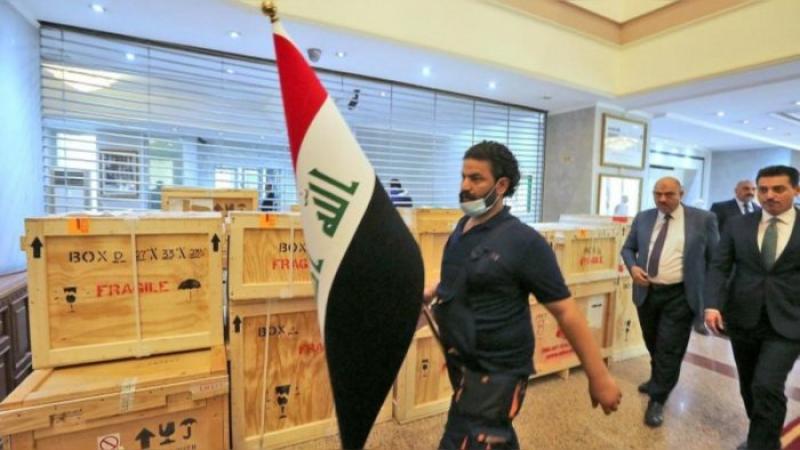 Staff at the Ministry of Foreign Affairs in Baghdad prepare for a handover ceremony of returned antiquities on August 3, 2021. Credit: AFP Photo

On July 27, 2021, the Iraqi prime minister’s plane landed in Baghdad with a heavy cargo load. While visiting the United States on official business, Mustafa al-Kadhimi had collected 17,000 archaeological artifacts that had been stolen from Iraq and returned them to their homeland, marking the “largest return of antiquities to Iraq” to date.

Included in the 17,000 objects were clay tablets and seals dating back to Mesopotamia, one of the earliest known civilizations, which was located in what is now Iraq. These tablets are vital pieces of Iraqi and global history, representing the advent of written language and describing early scientific and legal developments. One of the most famous items returned to Iraq, however, is the Gilgamesh Dream Tablet, featuring a fragment of the Epic of Gilgamesh in cuneiform script on a tablet measuring only six inches by five inches. This item in particular is central to Iraqi cultural history, representing the birth of literature in the region over four thousand years ago.

The antiquities were seized by the United States Justice Department from two institutions, Cornell University and the Museum of the Bible. In a public statement, Cornell thanked the Iraqi government for their assistance in repatriating these items, and expressed interest in future collaborations with Iraq “to study and preserve its cultural heritage.”  However, such a relationship requires a significant amount of trust. Hassan Nadhem, Iraqi minister of culture, tourism and antiquities, told the New York Times that Cornell’s previous decision to allow scholars to study the tablets without consulting the Iraqi government left a “bitterness” toward the university.

The Museum of the Bible has changed their acquisitions policy to focus on domestic purchases of objects with clearer provenance history, including early Bibles, rather than pre-Christian antiquities with unknown origins. In fact, their collections management policy now requires that the museum "thoroughly research the ownership history of a Work(s) prior to its acquisition and make a rigorous effort to obtain accurate written documentation with respect to its history, including its publication and exhibition history, import and export documents as relevant, and its copyright ownership.” Provenance research prior to acquisition was not a requirement for the museum in past years, an error that resulted in the purchase of not only looted antiquities, but a large number of forgeries. In 2017, our Center published a blog post on a collection of Dead Sea Scroll fragments on display at the Museum of the Bible that were rumored to be forgeries; last year, independent researchers confirmed that all 16 fragments of the Dead Sea Scrolls held by the museum were fakes.

While the repatriation of items to Iraq is a sign of progress, it is important to note that this process began eight years ago in 2013 and required pressure from the United States Justice Department. The Center for Art Collection Ethics encourages cultural institutions to foster transparent relationships with other nations and enforce provenance research prior to acquisition. These proactive measures help prevent trafficking, at a time when the illicit market is thriving, and bolster ethical stewardship.