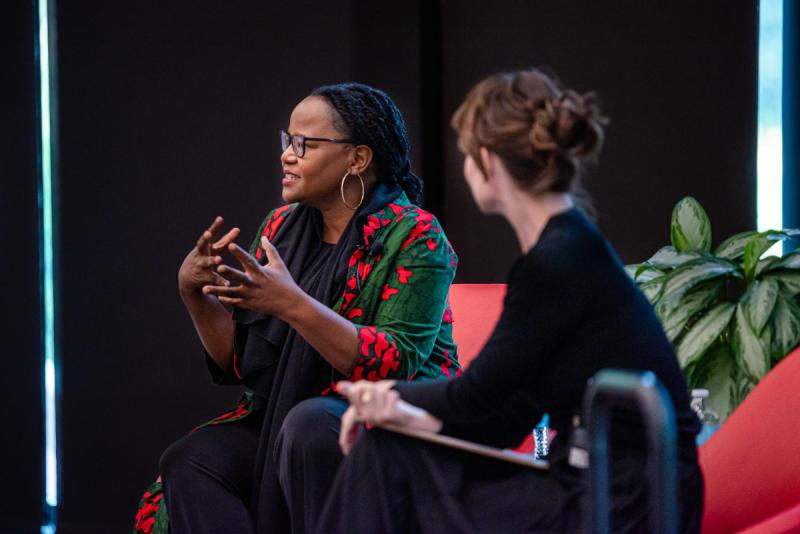 Edwidge Danticat in conversation with Assistant Professor of Poetry Lindsay K. Turner at the University of Denver.

On October 1st, the Center for Judaic Studies and the Department of English & Literary Arts welcomed Edwidge Danticat for an intimate conversation with Assistant Professor of Poetry Lindsay K. Turner. Edwidge Danticat is the winner of the 2018 Neustadt International Prize for Literature for her collective body of established and prize-winning fiction and nonfiction, much of which is focused on the lived Haitian migrant experience in the U.S. and elsewhere.

The conversation began with Danticat’s recollection of a striking image from recent days: U.S. Border Patrol officers on horses, violently pursuing Haitian immigrants trying to cross the border near Del Rio, Texas. In this photograph, several male immigrants are holding bags of take-out food they collected for their families, most of which is destroyed in the unfair pursuit.

“You spend so much energy defining your humanity, while your soul is somewhere else,” Danticat said when asked about the image’s lasting impression.

The discussion focused on Danticat’s writing process, her writing output and her understanding of the ongoing humanitarian and political crisis in Haiti. Danticat further elaborated on the beauty of the Haitian landscape, a motif which inspires much of her writing, noting that the landscape shapeshifts as, “a contrast to horrors, a landscape of war.”

Danticat joined her migrated family in Brooklyn when she was 12, and one of the ways her writing took shape was through the letters she wrote to her many beloved family members back in Haiti.

“We had to be so careful to not break each other’s hearts,” Danticat noted.

This is often the driving sentiment for Danticat’s essays and stories about familial losses and the material inequities global migration systems continue to perpetuate.

The Neustadt-prize jury read Danticat’s “The Dew Breaker,” a story about a Haitian immigrant who harbors a dark secret that upon arrival to Brooklyn, begins to unravel to highlight the depth of shortcoming America is prone to offer the outsider.

Of Edwidge Danticat’s work, the nominating Neustadt juror Achy Obejas writes, “In her work, Danticat addresses how the specter of history haunts the unresolved present and undermines the future; how nationalism and national identity can be sources of both pride and corruption.”

Established in 1969, The Neustadt International Prize for Literature paved the way for Edwidge Danticat’s visit to DU. Associate Professor of Literature and Director of the Center for Judaic Studies Adam Rovner was excited when Edwidge Danticat won the 2018 Neustadt Prize, as he often teaches her work in his FSEM seminars.

“Kathy [Neustadt] herself contributed funds to have Danticat visit, with the idea of helping the Neustadt Prize gain a larger public profile,” Rovner says.

The Neustadt International Prize for Literature is the first international literary award of this scope to originate in the United States and is one of the very few international prizes for which poets, novelists and playwrights are equally eligible. Rovner believes that hosting the award winner falls nicely in line with DU’s aim to internationalize and move intentionally toward a broader and more collaborative ethos of diversity. Rovner hopes that future Neustadt Prize winners will also visit DU and bring words and thoughts of inspiration to students across the University.

Edwidge Danticat concluded her conversation by encouraging the audience to recognize the beauty of creating art under painful and difficult circumstances, implying that if under great duress we are still compelled to create, there will come a rich reward. 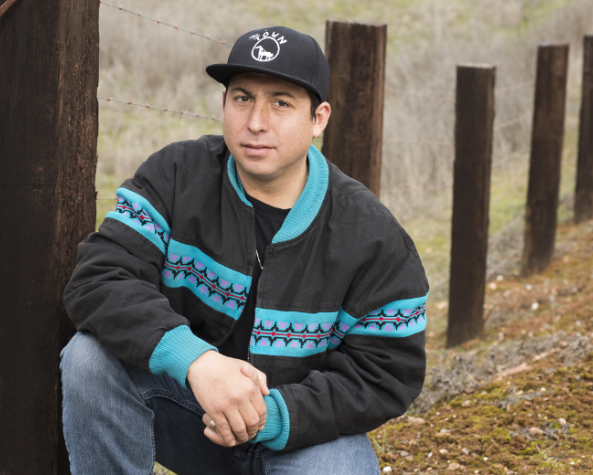 Q&A: Tommy Orange, Author of "There There"