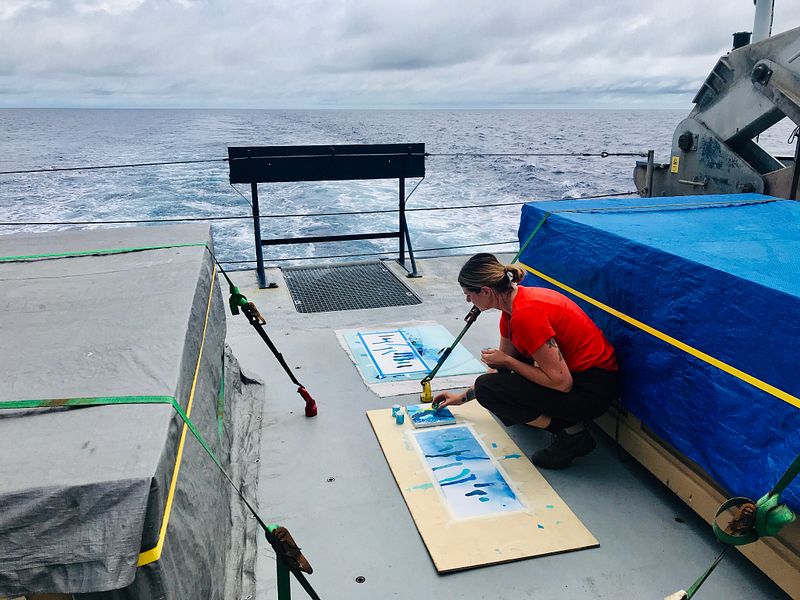 Bailey Ferguson (BFA '08) recently participated in the Schmidt Ocean Institute Artist-As-Sea program where she lived aboard the Falkor, an oceangoing research vessel. Ferguson and a group of scientists explored the deepest part of the Pacific, while sailing from Honolulu Harbor, Hawai’i to the Port of Suva in Fiji.

As Ferguson explains, “The Schmidt Ocean Institute (SOI) is a non-profit foundation that works to advance ocean research with state-of-the-art technology. For each expedition, SOI hosts a team of scientists. When there is room for additional personnel on a voyage, SOI will invite an artist to participate in the Artist-At-Sea program.”

The ocean has long served as inspiration in Ferguson’s art. Growing up in Nebraska, a landlocked state, Ferguson had never seen the ocean until she was 15. At the first sight of the ocean, she experienced a range of emotions.

“It felt very distant, vast and uncomfortable, yet mysterious and energetic,” she says.

For a decade after graduating from DU's School of Art and Art History, Ferguson created palette-knife paintings of land and seascapes. Then, a few years after moving to Hawai’i, she experienced a volcanic eruption that would change her work forever.

“During this uprooting, my art transformed and I began to use art to abstractly interpret the earth sciences, like volcanology and oceanography. I became more and more sensitive to what’s underneath the surface of the ocean and the overall health of the ocean.”

As an artist in residence, Ferguson felt that moving her work offshore and into the depths of the ocean would deepen her understanding of ocean conservation.

“Like a traditional residency, the Artist-At-Sea program provides the space, resources and time to create art; however, in this case, I am part of the research — I discuss issues, workflow, ideas and concepts with the team and I’m also a conduit for marine scientists to reach a broader audience.”

“In turn,” Ferguson continues, “I get a very unique experience working and living among scientists who can speak to the issues facing our oceans today. For example, I learned that we actually know more about the surface of the moon than our own ocean floor."

During her 14 days aboard the Falkor, Ferguson completed three major projects. In 2,745 Nautical Miles; (Movement Painting), she created a daily visual memory of her time at sea.

“Every morning I went onto the stern of the ship, poured 1/3 ounce of fluid paint onto canvas and allowed the ship’s movement to manipulate the paint. I chose the daily color based on the outside conditions. In the end, it was like a timeline of the conditions at sea.”

Additionally, Ferguson was offered the rare opportunity to have work displayed on the seafloor. For this piece, Ferguson painted Antler Coral, a keystone species that acts as home to fish and invertebrates around the Hawai’i Island Chain, which will be installed onto the Institute’s Remotely Controlled Vehicle (ROV) SuBastian.

As she explains, “Falkor is creating high-definition seafloor mapping everywhere the ship goes.”

Creating these pieces was no easy task, as Ferguson had to adapt to an array of conditions. But Ferguson didn’t let these challenges hold her back. As part of her experience, she not only created her own work, but also learned the history of the Falkor, gained an understanding of crew members’ travels and scientists’ endeavors and shared her experience with high school art students via a satellite ship-to-shore class.

“As an artist, I was experiencing poetry in nature. The entire experience was sensory — the aroma of seawater, the constant roar and vibrations of the two main engines and the sway as I gained my ‘sea-legs.’”

Ferguson continues, “The sights will be some of my most cherished memories, like the great expanse of ocean in 360 degrees, gazing through the circular window in my berth to watch waves fold into the ship’s side, catching a glimpse of the flying fish that sail above the water — and sometimes all of these under the light of the moon. These intimate experiences were the magic of the voyage." 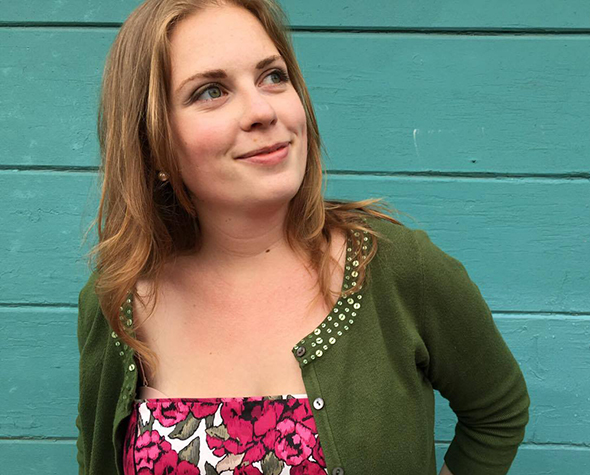 Art History Alumna Makes a Career in the Nonprofit World 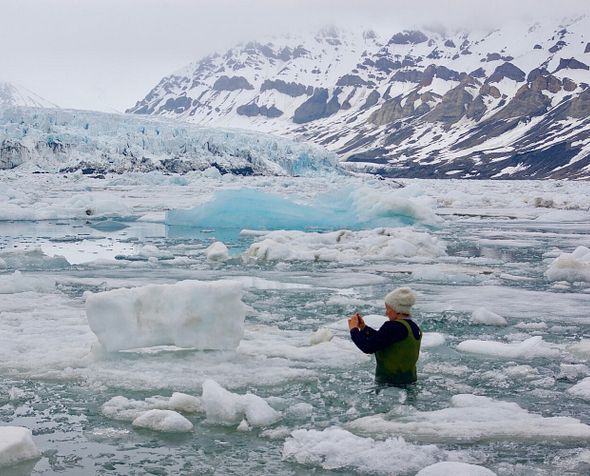 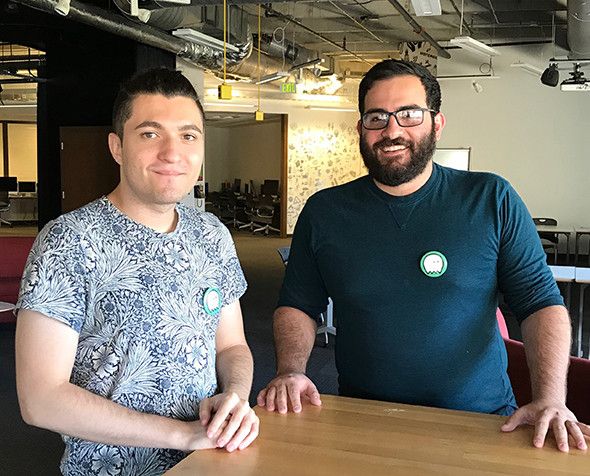